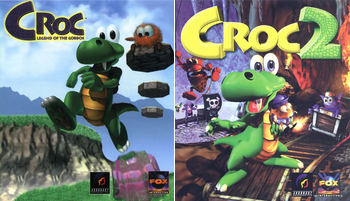 Croc is a Platform Game for the PlayStation, published by Fox Interactive (now 20th Century Fox Games) and developed by Argonaut Software.

The plot mainly consists of the titular crocodile rescuing his friends/Adoptive Parents, a species of small furry creatures known as "Gobbos", all while trying his best to defeat the evil wizard Baron Dante and his demonic minions, the Dantinis.

Tropes of Croc: Legend of the Gobbos: