Spoilers for all Crash Bandicoot games preceding this one will be left unmarked. You Have Been Warned! 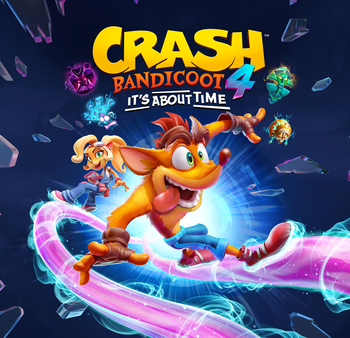 You can say that again.
"Crash Bandicoot. You banished me to the past, but all it did was give me more time to plan your doom."
—Dr. Neo Cortex
Advertisement:

Crash Bandicoot 4: It's About Time is a 3D platformer developed by Toys for Bob and the eighth installment in the Crash Bandicoot seriesnote if you only count home console platformers. It is the series' first original platforming title since 2008's Crash: Mind Over Mutant, and is a direct sequel to Crash Bandicoot 3: Warped, using a similar art style to Crash Bandicoot N. Sane Trilogy (though with some changes in character design).

In the aftermath of Warped's events, Dr. Cortex, Uka Uka, and Dr. N. Tropy were left stranded in time and space with no way out... but of course, that didn't stop the villains from trying. After decades of fruitless attempts, they eventually escape their makeshift prison. But there's even worse news—namely, the fact that in the process, they tore a hole in the space-time continuum, which not only exposes an entire multiverse, but puts all of it at terrible risk. Crash and Coco Bandicoot catch wind of this disturbance and set out to fix it by traversing the many universes to gather the four Quantum Masks; their powers will not only repair the rift, but aid the two on their journey. All the while, Cortex and his associates endeavor to stop them so that the multiverse can be theirs for the taking. Where will this adventure take them? One thing's for sure: it's gonna get weird.

It's About Time for tropes:

"The events of this game are absolutely 100% canonical, unless you didn't like them. In that case, it was all a dream."
Feedback

When Neo Cortex after having to deal with his past self's stubbornness asks if they have any idea how stubborn he used to be Crash, Coco, and Aku Aku agree with him though Crash simply just nods his head due to being a Heroic Mime.

When Neo Cortex after having to deal with his past self's stubbornness asks if they have any idea how stubborn he used to be Crash, Coco, and Aku Aku agree with him though Crash simply just nods his head due to being a Heroic Mime.