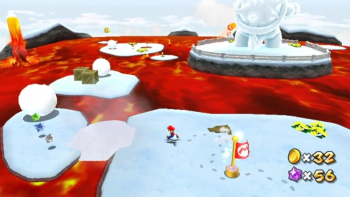 Comes in two beautiful weather options:
Too hot and too cold.
"Why is the fire castle in the forest with the ice mountain, anyway? That's just silly-bob."
— raocow, "ApoF - 20 - flaming fortress found in the frozen forest"

An unusual way of saving time or storage space, bringing some originality into the standard Video Game Settings: Take two stock settings and combine them into one. Bonus points if the two are diametric opposites. Triple word score if the two are actually Lethal Lava Land and Slippy-Slidey Ice World; the pervasiveness of this combination probably stems from the fact that these are the two level themes that can be definitely called "opposites" and the fact that Color Contrast between the two makes the level more visually interesting. (It's also one of the few cases where such a thing is remotely plausible; see the Real Life section of the examples.)

The simplest way is to divide the area in half. Half of it is one stage, the other is the second kind. This can also be done chronologically, where the stage is the first way in the first half of the game, but gets changed in the second. A really clever designer will combine them into a coherent whole (bonus points if the combination makes sense).

In some cases, a game's entire setting may be focused on one trope, which may combine with the others by necessity.

See also Ninja Pirate Zombie Robot. See Patchwork Map for when this occurs in the overworld. If done to a whole planet, you're likely dealing with a Tidally Locked Planet.

open/close all folders
Anime and Manga
Card Games
Advertisement:
Comic Strips
Fan Works
Films — Live-Action
Literature
Mythology and Religion
Tabletop Games
Video Games
Web Animation
Webcomics
Web Video
Western Animation
Real Life
Cranky Kong: Back in my day, you'd be lucky to have any discernible level theme; usually, you'd just get a completely black background with some basic tile textures for you to move around on. Now you kids are so spoiled with all these diverse themes that you've resorted to combining them in crazy ways because you're bored with the old ones!
Feedback