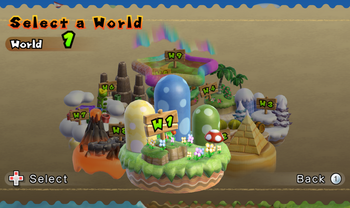 Counterclockwise, from bottom: Green Hill Zone, Shifting Sand Land, Slippy-Slidey Ice World, Palmtree Panic, Jungle Japes, Death Mountain, Level in the Clouds, and Lethal Lava Land. Space Zone is the star world floating above the other eight.
"The first board would be the jungle board, and maybe the second board is ice world, and then there's probably a desert world in there and a fire world..."
— Strong Bad, Homestar Runner
Advertisement:

See also Law of Cartographical Elegance, Sorting Algorithm of Threatening Geography and Video Game Geography. Not to be confused with the kind of settings which alter some aspects of the game, Role-Playing Game 'Verse and RPG Mechanics 'Verse which are settings that run on video game logic.

These settings are specifically focused on describing types of video game settings, and aren't generally applicable to other media outside of the context of discussing or portraying games.

These are more general settings that can and do appear in multiple kinds of media, but which are also popular choices as video game areas.