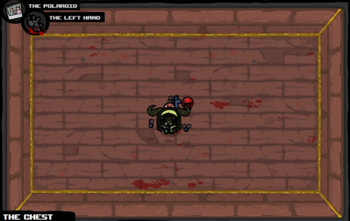 You're playing a maze-type game, and you notice an exit you haven't used before. You go through it, and... hey, where are this room's exits?

Usually a subtrope of Unwinnable by Design (although can also be Unintentionally Unwinnable), a Dead End Room is used as a fiendish trap by the game's designers. Either the room simply has no exits, or if it has, they only lead back into the same room or into a closed cycle of rooms which connect only to each other, not to the main maze.

If they really want to hammer home the point, everything in the room hurts or kills you when touched, so your game will soon be over anyway even if you don't reset.

Expect some kind of friendly label to let you know you're screwed, such as "DIE MORTAL".