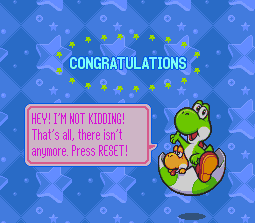 Alright! I get it! I'll turn off the system.
Advertisement:

So you beat the game. Congratulations. Enjoy that beautiful clear screen. Of course, you likely feel there is more you can do in the game that you haven't done and want to continue playing. However, no matter what button you press on your controller, you can't get out of the clear screen and return to the title screen. The only way to get back is to either reset the system or close the game. This trope is very common in older games, but some modern games have also been known to do this.

In most cases, this is likely done deliberately. Maybe the developers assumed that the player would just shut the system off upon beating the game anyway, so they don't bother to program a way out of these screens. You won't need to worry about losing your progress if said game has an Autosave feature, as it will recognize that you have beaten the final boss. For games without an Autosave feature, you'd better make sure to save if you decide you want to play that file again, especially if you haven't saved in hours since reaching the end. Otherwise, you may find yourself resetting back to more than the near end.

Not to be confused with Kill Screen, which results in games that weren't even programmed to have an end, or The End... Or Is It?. Or credits that last 40 minutes.

As this is an ending trope, expect spoilers.