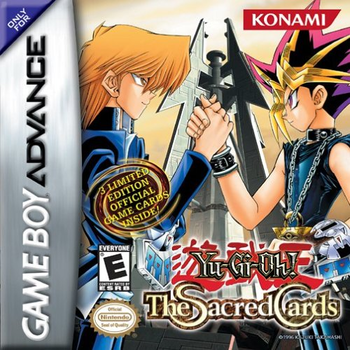 Yu-Gi-Oh: The Sacred Cards is a Game Boy Advance video game made by Konami based on the Battle City arc of the Yu-Gi-Oh manga and anime. The plot itself is more or less a Self-Insert Fic of the Battle City arc, with the player character replacing Yugi as the main protagonist. Yugi himself does appear in the game, albeit with a much smaller role.

The game uses unique rules only vaguely similar to the Yu-Gi-Oh TCG, implementing the early manga and anime's field power bonuses and unique monster effects. The game runs off the basic rule-set used in Yu-Gi-Oh! Dark Duel Stories, with most of the quirks in between like monsters behaving very differently from the real-life card game and an Elemental Rock–Paper–Scissors system that bypasses the stats of battling monsters.

The game also has a deck capacity limit in order to keep players from adding a bunch of game-breaking monsters to their deck and breezing through the entire game, so grinding will be required at certain points throughout the game. The game got a direct sequel in Yu-Gi-Oh! Reshef of Destruction, which is much, much more difficult.