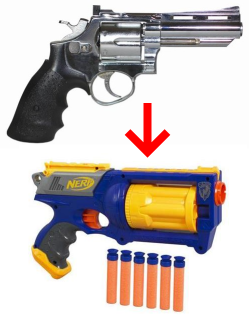 Hey, that magnum was really overpowered before the patch.
"Death hath no sting. NERF, however, is very painful."
— "Things I learned playing MMORPGs, Number 21."
Advertisement:

A change to a game that weakens a particular item, ability or tactic. It's usually done to fix something perceived as a Game-Breaker, and is almost always a subject of controversy in gaming communities. Occasionally, it's not a change in one game, but rather a change in an equivalent item, ability, or tactic between one game and its sequel.

In the past, NERFs for console games were all but impossible due to lacking the ability to patch them. Modern consoles, however, provide this ability, so they now join computer games in this. Many games, especially MMORPGs and other online multiplayer games, are constantly adjusted to maintain balance. Sometimes, that requires taking something powerful down a peg or two. Of course, users of that item will not be amused, and will inevitably flock to the forums to complain, resulting in a Flame War about whether or not the NERF was justified. On the other hand, rants from Scrubs that something should be nerfed are just as common. Either way, the subject is a touchy one.

A Balance Buff or Revamp is a change for the better. These are as controversial as Nerfs; a Buff or Revamp to one unit's Hit Points is effectively a Nerf to the damage of anything attacking it. A Flame War can even develop on whether a given change is a Buff, Revamp or a NERF, much less an improvement in the game as a whole.

So why are NERFs perceived as being such awful things? Well, human beings and even other great apes have a tendency towards loss aversion. For example, if playing a game of chance where you could lose $100, most people would only play if there's also a chance you could also win $200 or more. It works the same way with favorite characters or tactics; perceived losses simply hurt more than perceived wins.

These days, the term has been expanded so that "NERF" is any downward adjustment, not just an unduly crippling one; similarly, the "Nerf Bat" is no longer what the player is issued to take on The Empire with, but what the developer whacks him with. Anything subject to these kinds of NERFs might still be useful, but it won't be a Game-Breaker anymore.

Nerfs are sometimes a necessary evil for the good of a game's long-term health, particularly competitive games with long ongoing support. If left unchecked, developers will keep adding new things that are stronger and better than the old ones to both keep players interested in the new content and to give them a reason to use them. This phenomenon is known as Power Creep, and nerfs are the most effective way to combat this besides the more nuclear option of outright removing them.

Games with Fake Balance often cause flame wars due to nerfs and buffs (and including revamps) implemented.

Distinct from Nerf Arm, which is a weapon that the player can intentionally weaken themself by using. We also have a page on the Nerf Brand of toys from which the name is derived.