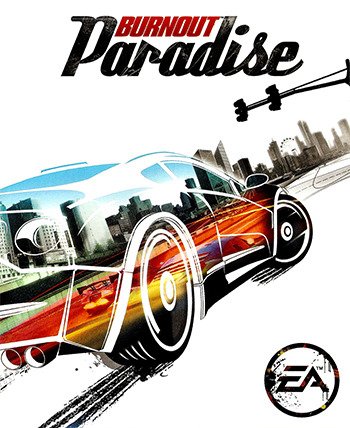 "Take me down to the Paradise City
Where the grass is green and the girls are pretty"
"Welcome to Paradise City, the home of Burnout driving. From the winding trails of White Mountain, to the grid network of Downtown Paradise. The city has miles of open road. Explore everything at your leisure. This is unlike any driving experience you've ever had. [...] The world is full of surprises. We'll keep you updated as you drive. What happens next is completely up to you."
—Jules de Jongh in the FMV intro

to Burnout Paradise
Advertisement:
"This is Crash FM and I'm DJ Atomika, fresh from Radio Big to be your guide to the streets of Paradise City."
—DJ Atomika (Mark Hildreth) at the beginning of Burnout Paradise in-game immediately following the FMV.

Burnout Paradise is an arcade-styled Racing Game developed by Criterion Games and published by Electronic Arts. Released for the PlayStation 3 and Xbox 360 in January 2008 and later for Microsoft Windows on 5 February 2009, it is the fifth and most recent main title (and seventh title overall) in Criterion's Burnout series.

Unlike past games in the Burnout series, Paradise shifts the game into a Wide-Open Sandbox setting called Paradise City, a coastal city containing three urban districts (a northern mostly high-residential district named Palm Bay Heights, a southern naval harbor district called Harbor Town, and the Downtown district to the southeast) and its nearby rural area to the west surrounding a large reservoir named Silver Lake, with said rural area bordered by the White Mountain region. A later DLC packnote Released only for PlayStation and Xbox in the original version; mods allowed it to enter the PC realm with some limitations before a remastered release officially did so. would also provide access to a small, urbanized island called Big Surf Island off the east coast of the city, connected via a semi-completed suspension bridge called the Paradise Keys Bridge. Within this very nonlinear open world environment, Paradise gave players a lot of things to do:

There are also smash gates, smashable billboards, parking garages, and super jumps* mega jumps in Big Surf Island for players to find all over the city, which unlock special cars and achievements should players find them all. Several drive-through shops also allow players to have their vehicles repaired, repainted, or have their boost meters refilled. Another innovation added to the game was Online Freeburn, where players could go straight into an online session with up to eight players. In Online Freeburn, players can roam around Paradise City like in single-player, doing just as many things with friends and strangers as they could do alone. They can:

Burnout Paradise received rave reviews from critics, including some driving game of the year awards. Even though Criterion could have just made the game and called it a day afterwards, they gave the game numerous updates and Downloadable Content, which went on for over a year. Said updates and DLC included motorbikes, controllable time of day, several fun car packs, a share-the-controller Party mode, and the aforementioned Cops and Robbers game mode and Big Surf Island area.

The Xbox 360 version of the game was added to the Xbox One's backwards compatibility program on 22 November 2016, over a year after Criterion announced they would do so.

In addition, that version was available for free via Xbox Live's Games with Gold program from 16—31 December 2016.note A fair warning to achievement-hunting Xbox One owners without an Xbox 360, there are two achievements that require the use of an Xbox Live Vision camera, which is not compatible with the Xbox One.

A remastered version of the game, Burnout Paradise Remastered, was released for Xbox One and PlayStation 4 on 16 March 2018

to celebrate the tenth anniversary of the original. Handled by Stellar Entertainment Software in cooperation with Criterion, it supports 4K resolution at 60 FPS on Xbox One X and PS4 Pro,note native 4K on Xbox One X, checkerboard 4K on PS4 Pro with native 1080p at 60 FPS for the standard models. Remastered contains all DLC included except for the unlock-all-in-game-content-immediately Time Savers Pack. EA Access subscribers on Xbox One got to play the game a week early on 9 March for up to ten hours. A Windows PC version of Remastered was released on Origin on 21 August 2018,note Steam followed suit on 4 June 2020 which means that PC gamers finally get to drive on Big Surf Island officially (no mods required) and play Cops and Robbers. A port of Remastered for the Nintendo Switch was released on 19 June 2020, supporting 1080p resolution docked and 720p resolution handheld, but still running at 60 FPS like every other release.

Crash FM would like to remind you to look out for these tropes when cruising through Paradise City: