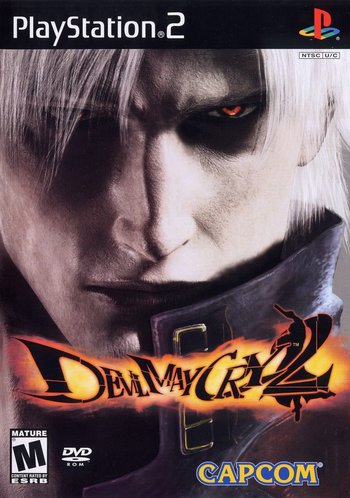 Dante, not as you know him.
Advertisement:

Devil May Cry 2 is a Stylish Action Hack and Slash action game for the PlayStation 2, developed and published by Capcom in 2003. A sequel to the hit Devil May Cry, it's set on the island of Vie de Marli (originally known as Dumary Island) and centers on a stoic Dante, veteran demon hunter, and a mysterious redheaded woman named Lucia as they fight to stop the Uroboros corporation and its CEO, Arius, from reviving the demon king Argosax.

This game was the first in the series worked on by Hideaki Itsuno (who would go on to direct the rest of the games in the main series) and introduced many mechanics that would be refined and expanded upon in later DMC games, such as an evasive action or a Real-Time Weapon Change button, as well as the Bloody Palace arena mode.

There's also a Light Novel published in 2003 which serves as a prequel to the game.