All spoilers for Metroid (as well as its remake) and the Metroid Prime trilogy will be left unmarked. You Have Been Warned! 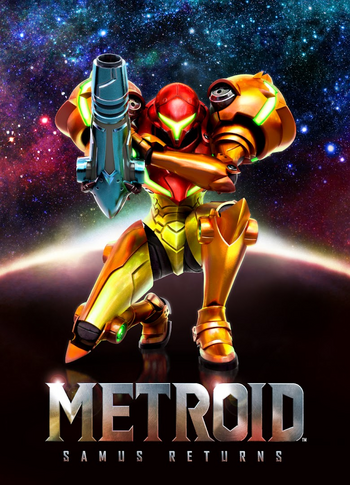 At last, the Hunter has returned.
Advertisement:

Metroid: Samus Returns is a 2017 2½D action-platforming game for the Nintendo 3DS, co-developed by MercurySteam and Nintendo EPD. It is the first 2D platformer in the Metroid series since Metroid: Zero Mission, which was released thirteen years prior.

Much like what Zero Mission is to the first Metroid, Samus Returns is a complete re-imagining of the Game Boy title Metroid II: Return of Samus. The premise remains the same as the original: the Galactic Federation, deciding that the Metroids are too dangerous to be left alive, hires Samus to go to Planet SR388 and exterminate them. Compared to the original title, Samus Returns has received a massive overhaul in the visuals department, moving forward to a vast, 3D landscape while updating the look and feel of the game into one consistent with the Metroid Prime Trilogy. Gameplay has also received major updates; in addition to the introduction of gameplay mechanics and abilities first introduced in later games in the series, Samus Returns features a duo of new core gameplay mechanics: the melee counter, a Counter-Attack that allows Samus to parry and dispatch her foes, and the Aeion abilities, a set of four never-before-seen abilities that grant Samus incredible powers.

A 3D version of the trailer can also be downloaded on the Nintendo 3DS eShop.

MecuryStream would return to work on the franchise with Metroid Dread, the long awaited follow-up to Metroid Fusion that builds on their work on Samus Returns.