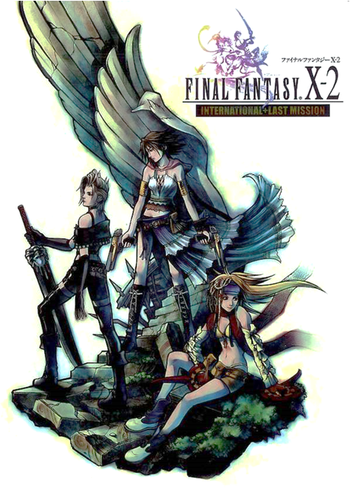 This is their story now.
"With so many things woven together...what could be waiting where the threads meet?"
Advertisement:

Final Fantasy X-2 (pronounced "ten-two") is a sequel to the tenth entry in the fist-bumpingly popular Final Fantasy series. It is the first direct sequel to a mainline Final Fantasy game, barring Legend of the Crystals (Final Fantasy V's Sequel in Another Medium), which predated X-2 by nine years. It's also the first Final Fantasy title released in in the U.S. after Squaresoft's merger with Enix.

Two years after Tidus' disappearance, Spira has entered a golden age known as the Eternal Calm. The scourge known as Sin is gone for good, and machines (formerly derided as "machina") are no longer considered taboo. An eager new generation called "Sphere Hunters" scour once-forbidden ruins in search of historical records that have been buried by the church of Yevon.

Yuna, now free of her obligations as a summoner, is visited by her cousin. Rikku has a sphere of someone who looks exactly like Tidus in her possession. Captivated by the mystery and wanting to reinvent herself, Yuna runs away with Rikku to join a Sphere Hunter group, the "Gullwings". Along with Paine, a cool-headed warrior with an acerbic tongue, they scour the world for adventure, fortune, and (hopefully) answers to the mystery man in Rikku's sphere.

It's not all fun and games, though. Spira is cracking up in the wave of unprecedented societal progression, and two opposing factions are looking to win the hearts of the people. On one side, there is "New Yevon", a conservative successor to Yevon whose motto is "One thing at a time". And on the other side is the "Youth League", a group of radicals who aim to tear down the status quo as quickly as possible, no matter the cost. There's also the "Machine Faction", a neutral Al Bhed group supplying weapons to the other two, who desire only to promote the use of machina and remove stigma towards them by rebranding them as "machines". As hostilities between the League and New Yevon grow, the Gullwings begin to suspect that another party is behind the strife, and must discover the truth before history repeats itself and Spira is led down the path of destruction once more.

Advertisement:
X-2 jettisoned the brooding tone of its predecessor in favor of light comedy, featuring Magical Girl Transformation Sequences, boatloads of Fanservice, and a new score (including Japanese Pop Music) replacing the sweeping orchestra of past games. The game is also open-ended: You get access to an airship almost from the start, and there are dozens of non-compulsory "Missions" separate from the main story, not all of which can be done in a single playthrough. There's a New Game+ if you want to see everything, but getting 100% Completion (and the Golden Ending) is difficult even with this feature.

The plot starts out with Yuna toting her new duds, which many appropriately nicknamed the "Yuna Raider" outfit. At first it seems out of place, but it's intertwined with the Job System you learn about later on: You earn new jobs (here called Dresspheres) by completing sidequests and meeting certain requirements. (In a nod to III and V, it's implied that each contains the memory of a long-dead denizen of Spira, some of whom hailed from Tidus' hometown of Zanarkand.) Each comes with its own set of skills, and you learn new ones by using the Dressphere more often.

The experience and level system is back, and most welcome, though you still need to check the menu regularly to cash in Ability Points for new skills. Square also brought back the ATB system; not just that, but this game's version allows multiple combatants to perform actions at the same time (as opposed to prior iterations where only one can act at a time), resulting in surprisingly intense menu-based combat. X-2 is also the first Final Fantasy to allow class-changing in the middle of battle, and the first to award new skills mid-battle.

Along with X, an HD version of the game was released for PlayStation 3 and Vita as part of a Compilation Rerelease. (The PS3/PS4 version of X also includes X-2 on the disc, but the Vita version instead comes with a code for the digital version of X-2.) Like the X remaster, the HD release is the Regional Bonus version, which in X-2's case came with: two new Dresspheres, the Creature Creator (a game-changing feature which allows you to recruit enemies and bosses found in the game), some Fiend Tales (amusing side stories involving the fiends you capture), a Fiend Arena for them to fight in, and a Gaiden Game called Last Mission.

The compilation was also ported to PlayStation 4 in May 2015, and to Steam one year later. Finally, the compilation was released on Nintendo Switch and Xbox One on April 11, 2019 in Japan and Asia, and April 16, 2019 elsewhere.

Example of:
Item Get!