Hanging Our Clothes to Dry 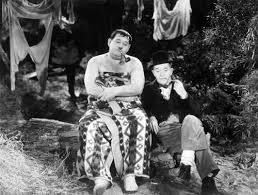 A character gets wet for whatever reason, like by falling into a river or stream. Upon climbing out and finding themselves lost in the woods, they do the first, most logical thing. They take off their clothes and hang them on a branch or over a fire to dry them off. This can lead to an awkward situation, as all the people are now either in their underwear or naked.

Depending on the people involved, it could be an awkward situation never to be spoken of again or a chance for the relationship between characters to develop. Sometimes, you can expect the characters to spend a night sitting back to back (to share body heat) and have an intimate, heartfelt conversation. When their clothes are finally dry, they will probably thank them for taking such good care of them...or threaten to kill them if they ever mention it again. Or even both.