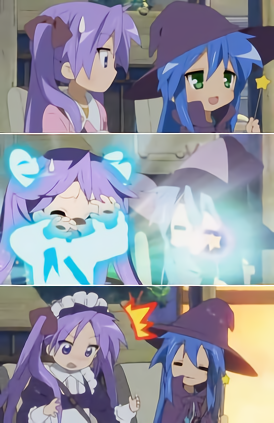 What happens when your Fairy Godmother is a Cosplay Otaku Girl.
"Holy crudscones! Why am I in women's clothing?!"
— Sokka, Avatar: The Abridged Series
Advertisement:

Some hapless character is swept off their feet by a cosplay enthusiast (or a whole bunch of them) and ends up wearing a new costume or disguise. Even if the outfit is extremely elaborate, the change looks almost instantaneous to the audience, sometimes shortly hidden by a Smoke Shield with the occasional Flung Clothing.

In every case, the process is inexplicably too fast for the "victim" to even notice it happening until after they've been fully dolled up — even if it includes lots of complex knots, several layers and/or a change of underwear, and thus should have taken hours and lots of sweat and tears (not to mention any potential kicking and screaming by the victim in question) to put on.

This is loosely based on real-life situations where someone is usually shocked by how they look in a changing-room mirror; however, this trope does away with changing rooms and mirrors altogether.

Sometimes justified by the cosplay enthusiast using a weird martial art allowing them to undress and then dress the victim at high speed.

Less ludicrous if it is some magic-user using a spell to induce the sudden clothes change (as with the page picture) but that's just cheating.

This is frequently the deed of a Lovable Sex Maniac, and even when not the case, the clothes will commonly be some kind of fetish wear, like Cat Girl, French Maid, Naughty Nurse Outfit, Panty Fighter, Playboy Bunny, Slave Girl, etc. — even if the subject is male! Often an excuse for the artists or costumers to put the characters into some unusual attires that they usually wouldn't be caught dead wearing.

Being knocked out and waking up in a weird outfit usually also counts. After all, dressing up someone unconscious isn't that easy either. Not to mention what it implies...

A variant exists when a person is expected to change clothes by him- or herself and is handed the outfit, absentmindedly dressing up. Again, just as implausibly, the reaction shot comes only after having finished putting everything on, up to the last button, as if the character just couldn't see what the costume looked like beforehand.

This trope is particularly common in Anime and Manga, where it is used for comedy and (of course) fanservice. In classic cartoons, this tends to happen as a "whirlwind" or as a "tear-away", and can even happen with one's own skin and fur.

A subtrope of Changing Clothes Is a Free Action. Compare Instant Costume Change.