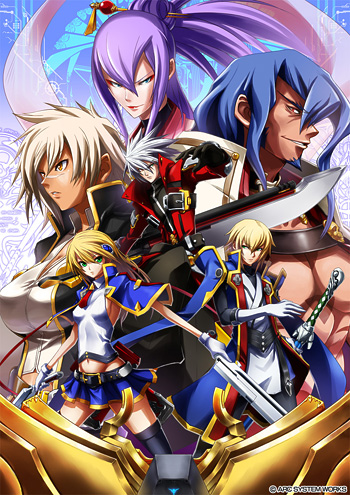 Be ready to rebel against the causality...
Advertisement:

BlazBlue: Chronophantasma is the third installment of the series by Arc System Works, fresh off from their fighting game collaboration with Atlus.

Ragna the Bloodedge approaches the Ikaruga Federation, once the focal point of a civil war that cemented the NOL's tyrannical rule over the world. Accompanied by vigilante catgirl Taokaka, he hopes to find the answers to the dark conspiracy revealed at the end of BlazBlue: Continuum Shift, connected to the actions of his arch-nemesis Terumi and his missing sister Saya. Meanwhile, Jin Kisaragi, Noel Vermillion and Makoto Nanaya seek to rescue their friend Tsubaki Yayoi, who has fallen under the control of Terumi and become a Knight Templar.

But complicating matters is the loss of one of the god-like entities of the BlazBlue universe, which has escalated a precarious stalemate into all-out war between the remaining sides. Each shot fired in this conflict tears a hole in the fabric of time and space itself, pulling material from Alternate Universes and rewinding time. If nothing is done to end this, then Ikaruga may collapse under the sheer weight of paradoxes before Ragna or any of the other vigilantes can accomplish their goals. The story will also deal with a new mystery element named the "Chronophantasma" (lit. "The Phantom of Time").

This new sequel does away with many of the old systems and adds in new mechanics. The Guard Primer system, originally modified from the Guard Libra system, is nowhere to be found, replaced by a new attack for each character known as a Crush Trigger, which allows the character to instantly break the opponent's non-Barrier Guard at the cost of 25% heat, making them equivalent to the Force Breaks (or EX Attacks) of Guilty Gear.

The most drastic change, however, is the Burst system. Defensive Bursts remain, but Gold Bursts have been removed and replaced with a brand-new technique for each character: Overdrive, a Super Mode that increases a character's power and enhances their Drive, its effectiveness increasing the lower their health is. The effects of each Overdrive are different for each character, and can sometimes enhance their supers as well. Upon activation, Overdrives also freeze the timer for their duration.

Each character also has new moves and balance changes, and their sprites have been totally redrawn from the ground up. Some characters also wear new outfits, such as Noel, who has discarded her military gear completely, and Tsubaki, who now wears her previously story-exclusive black uniform.

In addition, the roster introduces three brand-new characters (and one new boss):

Three more console-exclusive characters have also been confirmed, two of which are DLC (the first can be downloaded as well if you aren't going to play Story Mode):

Story-wise, the game does away with the individual Story Modes of the characters and introduces route-style story in which many characters partake at once, and all three storylines merge as they come into the climax and the true ending. It no longer has any bad ending, but the gag reels still appear.

On July 15, 2014, it was announced that a new update (simply named Blazblue: Chronophantasma Ver. 2.0) would come to the Japanese Arcade Cabinets. In addition to standard balance changes for the cast, it includes an updated HUD visor, additional stages, and two more additional characters.

While the Murakumo units were believed to be excluded due to their fates in the previous game and their exclusion in the debut trailer, this was changed with the next announcement stating that both Nu and Mu are confirmed to be in the game.

The story this time is split between three different (albeit interconnected) scenarios, each with their own set of playable characters and bosses. Chronophantasma's plot focuses heavily on Sector Seven and matters of the past, particularly the Six Heroes, whose subplot is concluded in this game.

Like it's immediate predecessor, Chronophantasma also has few Updated Rereleases as well.

Blazblue Chronophantasma 1.1: Mostly a balance patch for the Arcade and console versions to get the aforementioned exclusive console characters into the Arcade cabinets. This version was released on the Vita in April 2014, with some exclusive content, namely a new gag reel starring Ragna, Noel, Celica, and Kagura in a Beach Episode and a recap of the series` storyline to this point narrated by Ragna, Celica, and Rachel.

Blazblue Chronophantasma Extend: Another console update, bringing in the changes from the arcade 2.0 release to home systems. Adds Celica and Lambda as playable characters to the console version. There's also an additional story scenario starring Kokonoe, Kagura, and Bullet, in addition to one detailing the events of the Remix Heart manga, as well as abridged versions of Calamity Trigger and Continuum Shift (much like Calamity Trigger Reconstruction in CS Extend) and more gag reels. It was released in April 2015 for PlayStation 3, 4, and Vita and Xbox One in Japan, June 2015 in the Americas and October 2016 in Europe. This edition was also be released for PCs via Steam in March 2016.