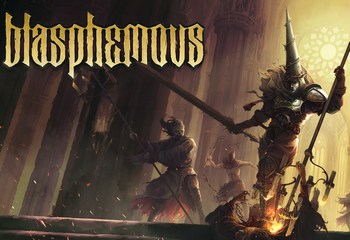 "Because it is my Guilt, I claim you, Grievous Miracle."
Advertisement:

Blasphemous is a 2-D Hack and Slash Metroidvania, developed by The Game Kitchen of The Last Door fame and published by Team17. Its Kickstarter campaign

The setting is a morbid world where people's sins have physically manifested due to something called the "Grievous Miracle," twisting humans into painful monstrosities. Players take on the role of "The Penitent One," the last member of a congregation known as The Brotherhood of the Silent Sorrow. After the deaths of his group, he finds himself in Cvstodia's "Age of Corruption", following the transformation of The High Pontiff into a burning tree whose ashes swallowed up a majority of the church leaders and transformed them into monsters. To set things right, the Penitent One is told to seek out the Cradle of Affliction, but to do so, he must first face three trials known as the Three Humiliations, all the while hunted by agents of the Church, whose leaders seek to ensure the Miracle remains so they can continue to draw power from it.

A Downloadable Content update, The Stir of Dawn, was released on August 4, 2020. It includes new story content, areas, and bosses, as well as New Game+ and new difficulty modifiers. View the trailer here

. A second free DLC, Strife and Ruin, was released on February 18, 2021. It features a crossover with Bloodstained: Ritual of the Night, adding new challenge rooms, a Boss Rush mode, and new render modes. You can view its trailer here

See Unworthy for a 2018 game with a very similar premise and gameplay, or Dark Devotion for a 2019 game with equivalent gameplay, but the inverse worldview on matters of faith and spirituality.

Sorrowful be the Tropes, Penitent One: