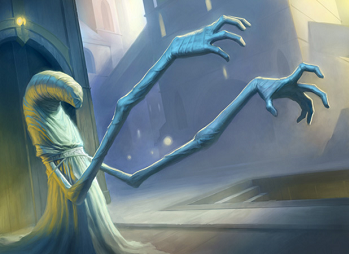 Want the cookies off the top shelf? I'm your guy!
Advertisement:

This is a trope where a monster of some kind has extra-long arms. These arms won't necessarily be used in a physical way. It's more just to indicate how unnatural the monster is. Shows up frequently on Humanoid Abominations as a quick way to indicate something's not quite right.

In some cases, the arms themselves might not even need to be shown: if the creature/character in question is wearing clothes of some sort, the arms might be hidden at first by long sleeves, only for their unnatural length to be revealed when they bend the arm or grab something.

Often paired with Creepy Long Fingers. See also Noodle People. Compare Rubber Man, who tend to be not (as) creepy.