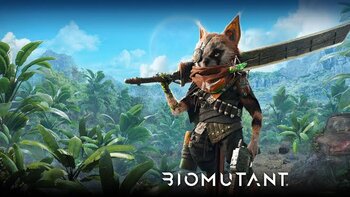 Biomutant is an Action RPG, developed by Experiment 101 (made up of former employees from Avalanche Studios known for creating Just Cause) under the publisher THQ Nordic, and released for PC, Playstation 4, and Xbox One on May 25, 2021.

The game is described by its creators as a "Post Apocalyptic kung fu fable", or "Kung Fu Panda with a touch of Mad Max in it". It is set in a world filled with animals who have mutated into sentient races a long time ago. Their new society centers around the great Tree of Life. One day, however, toxic oil came up from underground and began to poison the tree. Moreover, this weakness was sensed by four great monsters, which started to feast on the roots. It is now imperative for you to slay them all.

However, this is only a part of a larger mosaic, as there are six tribes around the tree, many with conflicting goals: for instance, only half of them are desperate to heal the World Tree to its former glory, as the other three are instead eagerly laying groundwork for their plans once it collapses. You are free to choose how you intend to interact with them, making decisions that'll significantly alter the course of the story.

, the 2017 extended gameplay trailer is here