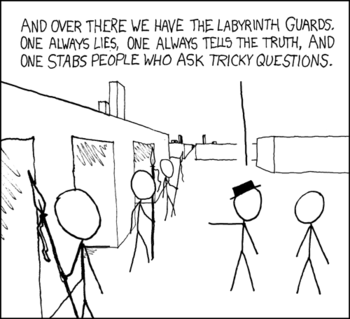 When game designers block Loophole Abuse by corking the loophole with a new rule, instead of eliminating or changing one of the rules that leads to the loophole.

Games, of various types, are about rules. They may have intricate backstories, multi-layered plots and other such. But in the end, they're about rules. Rules define what are legal moves and what aren't (even Calvinball, which just doesn't have the same rules all the time). Rules create fun.

Sometimes, rules can interact in ways that developers didn't intend, allowing players to play the game in ways the designers did not intend. This is called "Emergent Gameplay" and is typically considered a good thing. But at other times, it leads to Gameplay Derailment in the bad sense.

The obvious answer is to change the original rules, but this isn't always possible. Say your game is two weeks from shipping. One of your testers has just come to you with a horrifically game-breaking scenario, a way for a player to game the rules so that their powers spiral out of control and Curb-Stomp Battle everything in their path. And the rule interaction is very complicated; you can't just tweak a few things to bring this back into balance. In order to truly fix the problem, you would need to rebuild a number of rules, test those rules and so forth... and miss your ship deadline. What do you do?

Or maybe your game is out there already. Thousands, maybe millions of people are playing and enjoying it. Then some Power Gamer figures out how to game the system and auto-win with some horrific combination of moves. You certainly can't "uncreate" the game once it's out there, nor can you radically modify the rules so that particular combo doesn't work, because that would fundamentally change the game and honk off millions of customers.

Or maybe the game breaking interaction is based on the interaction of such fundamental rules to your system that they cannot be changed without making the game unrecognizable to what game you intended to make. What do you do?

Make an Obvious Rule Patch. That is, create a completely arbitrary rule that forcibly prevents the particular interaction from happening, while having as little effect on other rules as possible. Doesn't matter if it sticks out like a sore thumb even to someone who hasn't played the previous version.

Note that issuing an Obvious Rule Patch for a competitive multiplayer game too soon can damage the evolving Metagame, which can often bring potential Game Breakers back into balance. And just so we're clear, "Obvious Rule Patch" refers to the rule that obviously exists solely to patch up something rather than the something that "obviously" needs a rule patch. "Rule" here is a simple adjective - the Patch is the focus, and the Obviousness is what makes it this trope. For the obviously needed patches, see There Should Be a Law. Sort of.

This sometimes is a result of Executive Meddling - showing once more that despite the negative press it gets, the trope is not always a bad thing.

Compare Arbitrary Mission Restriction. Compare and contrast Nerf, a decision that waters down a too powerful element in the game instead of forbidding its use or access to it. Also compare Highly Specific Counterplay, when the developers introduce specific counterplay to the element instead of banning it. May, if the situation is enough of a corner case, result in That One Rule. May also be used to avert Misapplied Phlebotinum by expressly banning certain applications. This is the eternal nemesis of the Rules Lawyer. Overlaps with Moving the Goalposts when done poorly or unfairly.