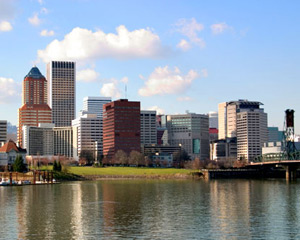 Portland, OR (not to be confused with Portland, ME) is Oregon's largest city and a major city of The Other Rainforest. Portland is known for being almost as rainy as Seattle but twice as bizarre. Portland's nicknames include the City of Roses/the Rose City, Stumptownnote Derived from the Oregon Trail era, when many trees were cut down to allow for the city's expansion, leaving stumps behind. Reportedly, early residents would actually jump from stump to stump to avoid walking in the muddy, unpaved streets., Portlandia, PDXnote Due to the abbreviation for the local international airport, Rip Citynote (mostly associated with the city's NBA team, the Trail Blazers) and "the place where young people go to retire". The residents are often stereotyped as hipsters, Granola Girls, New Age Retro Hippies, left-wing Moral Guardians, or any combination of the above. It is, however, not quite as bizarre as Portlandia would have you believe. Portlanders are serious about their beer, bicycles, books (Powell's Books is the largest used book store in the world), and food carts.

Portland is divided into five quadrants: North, Northeast, Southeast, Southwest, and Northwest. North and South are divided by Burnside Street (and addresses along Burnside are merely given the designation of "East" or "West"), while East and West are divided by the Willamette River. North Portland, finally, is basically a peninsula that juts off from Northeast Portland going into the Willamette. Downtown Portland is made up of central Southwest and Northwest Portland, while the "cool" hipstery areas are largely found in Southeast and Northeast (and are where a lot of the neighborhoods accused of having gentrified are located). There is an unofficial sixth quadrant occasionally referred to as "East Portland" or "East County" that starts roughly at 82nd Avenue and runs Eastward until it runs into Gresham, which has a reputation of being significantly poorer, under-served by city and county resources, and less white than the rest of the city, with a heavy Asian and Slavic influence. African-American Portlanders have traditionally been concentrated in North Portland (it used to be that they were "redlined" out of living in any other part of the city, though this is no longer the reason) although gentrification has pushed more and more black Portlanders Eastwards.

Works set in or near Portland: