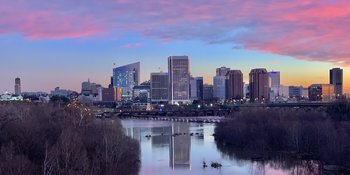 Richmond is the capital of the U.S. state of Virginia and its fourth-largest city by population. It is located at the fall line of the James River, from which its name—specifically a view of the James from Church Hill which is reminiscent of a view of the River Thames from Richmond Hill in Londonnote which itself took its name from Henry VIII's ancestral hometown of Richmond, North Yorkshire—is derived. Despite not being as prominent a state capital as Denver or Nashville, as the political center of what began as one of the original thirteen colonies Richmond has played a significant role in American history since the nation's founding, most notably as the capital of the Confederate States of America during The American Civil War.
Advertisement:

As Virginia has politically trended more leftward, Richmond has increasingly become considered a "northern" city (at least to people from the more conservative western parts of the state). It is known as "RVA", the "River City" (owing to its proximity to the James), and "the 804" (after its area code). If Richmond is known for anything not history-related by outsiders, it's for being the center of the American tobacco industry. In truth, Big Tobacco has become less prominent in recent years as engineering and technology companies have established a presence in the area. Richmond has also become an attractive shooting location for film and television productions.

In the realm of sports, Richmond has a AA baseball team, the Flying Squirrelsnote the name being chosen in a public contest, making the team the "Boaty McBoatface" of baseball. Virginia Commonwealth University (VCU), a.k.a. "The Berkeley of the South", which is a sprawling public university located close to downtown, is known for its Rams athletic program; the Rams men's basketball team made the Final Four in the 2011 NCAA Tournament.

Some notable neighborhoods and districts in Richmond include: