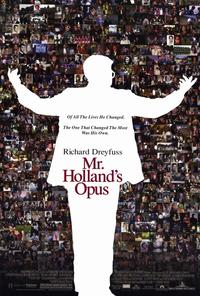 "Why is everyone else's child more important than yours?"
— Iris Holland
Advertisement:

Mr. Holland's Opus is a 1995 drama film, directed by Stephen Herek. It was partly intended as a remake of a previous film, Follow Me, Boys! (1966), but ended up very different. Among the most significant changes was the historical era covered. The original film was set in the 1930s and 1940s, this one covers a period of thirty years (1965–95).

The film opens in 1965 with Glenn Holland (Richard Dreyfuss) as a professional musical performer who wants to turn his efforts to composing a piece of orchestral music, something he intends as his Magnum Opus. Needing a job that pays enough to support himself and his wife Iris (Glenne Headly), yet leaves enough free time to compose music, Holland accepts a position as a high school music teacher. He soon discovers the position leaves him firmly at the bottom of the hierarchy of teachers. And as his apathy for the job starts to become apparent, Principal Jacobs (Olympia Dukakis) starts demanding more actual effort from him.

The film then follows his life with a specific segment devoted to each decade and different trials he has to go through. His domestic problems include his only son Cole being effectively deaf and unable to understand his father's work. Iris forms a strong bond with the boy and learns sign language to better communicate. Glenn, however, can't bring himself to do it, and ends up somewhat estranged from his own family. Meanwhile, his school life includes more than teaching music. He inspires troubled students to make something of themselves, change their lives for the better.

By 1995, Holland has spent most of his last three decades devoted to his students, at the cost of his personal life. His musical work is still incomplete and by now unlikely to ever see release. Even if completed, he is too old to re-establish his career. Then his life turns for the worst. New principal Gene Wolters (William H. Macy), who never cared for Holland anyway, decides to make necessary budget cuts. Among the first things to go are the music classes, leaving 60-year-old Holland unemployed. Holland fears he has wasted his life, and resigns himself to the fate of being forgotten by all those students he helped over the years.

Instead, he finds many of his former students have returned to help him complete his Magnum Opus and perform it for the first time, pointing out that their lives were made better because of him, and they repay the favor. The film ends with his family sitting among an entire auditorium of his students, both past and present, who have gathered to witness the aging Mr. Holland conduct his masterpiece.

The film earned Dreyfuss an Oscar nomination for the Best Actor and a Golden Globe award. It was also a considerable box office hit, earning $106,269,971 in the international market. With almost $83 million from the United States market, it was the 12th most successful film of its year. Michael Kamen, who wrote some of the original music of the film, went on to found "The Mr. Holland's Opus Foundation", devoted to "enabling more students to participate and experience a quality music education."