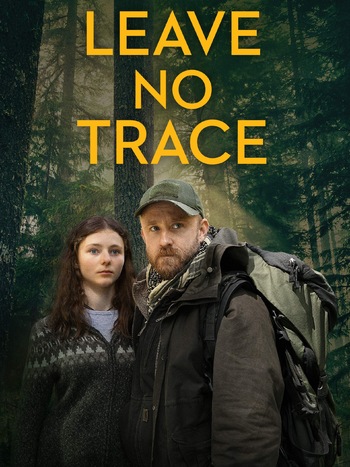 Leave No Trace is a 2018 American drama film directed by Debra Granik, with a script co-written by her and Anne Rossellini, based on the novel My Abandonment by Peter Rock. It is Granik's first scripted film since 2010's Winter's Bone, although she had directed the documentary Stray Dog in the interim.

Will (Ben Foster) and his daughter Tom (Thomasin McKenzie) live in a large public park in Portland, Oregon, carrying only barebones camping equipment and only going into the city for essentials when they absolutely have to; for cash, Will sells his VA-provided medications to a fellow veteran. Their goal is to avoid notice as much as possible. Nonetheless, a jogger spots them and notifies the authorities. They are soon assigned to live on a Christmas tree farm operated by Mr. Walters (Jeff Kober), who is moved by Will's military service to offer them housing and give Will a job. Will finds the structure on the farm suffocating, and soon the pair are on the run again. Their travels eventually bring them to an RV community in Washington state, a kind of utopian society outside of society.

Leave No Trace was universally acclaimed by critics, attaining a 100% freshness rating on Rotten Tomatoes with 241 positive reviews (as of 31 October, 2021

), making it the most-reviewed film with a 100% rating. While it wasn't nominated for any Academy Awards the National Board of Review did name it one of the Top Ten Independent Films of the year and recognized McKenzie as Breakout Performance.