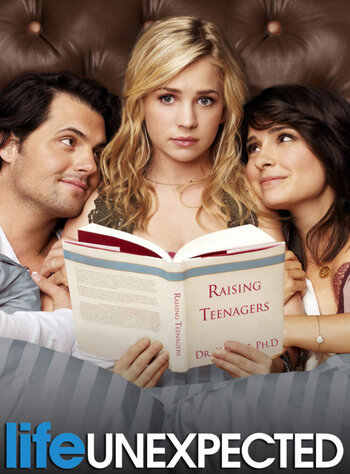 Life Unexpected is a Teen Drama that ran on The CW from 2010 to 2011 for two seasons.
Advertisement:

The series followed Lux (Britt Robertson), a 15-going-on-16-year-old girl with a problem. Given up for adoption as a baby, Lux has spent her entire life in foster care after she was diagnosed with a heart condition requiring surgery, making couples unwilling to adopt her. Tired of being bounced from one foster home to the next, Lux decides to seek out her birth parents in order to get the signatures she needs to obtain emancipation.

Her search leads her to Nate "Baze" Bazile (Kristoffer Polaha), a former high school football star who now runs a bar with his buddies. He is stunned to learn he has a daughter after a one-night stand in high school, and reveals to Lux that her mother is Cate Cassidy (Shiri Appleby), a local radio personality who Lux has listened to all her life. Cate is saddened when she meets Lux and learns she was never adopted. Both Baze and Cate give their signatures for the emancipation process.

However, Lux is denied emancipation by a judge, who decides to grant temporary joint custody to Baze and Cate, with Cate being the primary caregiver. All her life, Lux has never had parents, but now she has three— Baze, Cate, and Cate's fiance and co-host Ryan (Kerr Smith). And now it's up to all of them to somehow form a family.