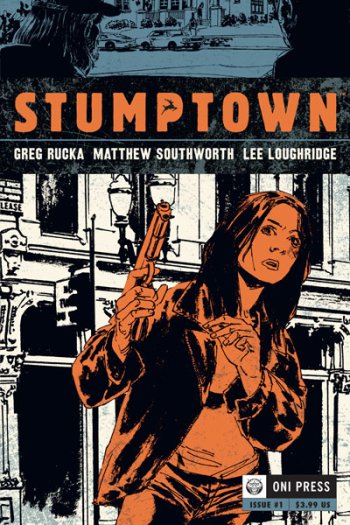 Add in two bad guys named Dill and Whale, one very rich, very powerful, and very connected man, and one easily broken car, shake well, and you get Stumptown.

Stumptown, written by Greg Rucka and published Oni Press, consists of two limited series—Volume 1, The Case of the Girl Who Took Her Shampoo But Left Her Mini (2009), and Volume 2, The Case of the Baby in the Velvet Case (2012)—followed by an ongoing, bimonthly series. So far, the monthly series has featured two arcs. "The Case of the King of Clubs" deals with an assault on a member of the Portland soccer community, while "The Case of a Cup of Joe" has Dex being hired to transport a rare, expensive batch of civet cat coffee.

On February 2019, it was announced that ABC had ordered a series based on the graphic novels, with Cobie Smulders cast as Dex Parios and co-starring Jake Johnson. The series debuted on September 25, 2019.