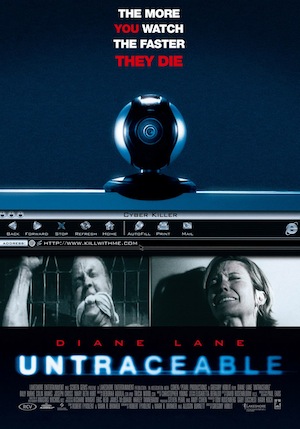 The bandwidth costs are killer.
Advertisement:

Untraceable is a 2008 thriller movie.

Jennifer Marsh (Diane Lane) is a single mother and an agent for the FBI's cyber crime unit with her partner Griffin Dowd (Colin Hanks). Their new case is tracking down and trying to bring down a new Web site, KillWithMe.com, which consists of streaming video of a cat put in a Saw-esque death trap, a chatroom for comments and a viewing counter which, as it rises, makes the death trap more and more dangerous for the victim inside. As the webmaster, Owen Reilly (Joseph Cross), moves up to human victims, the site's popularity grows, making the deaths on screen happen faster and faster.

The film is more or less a Take That! against media sensationalization of violence and gorn.