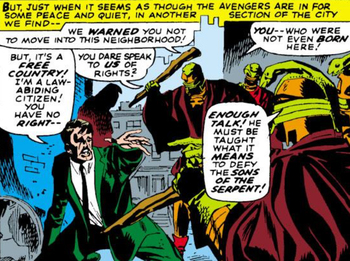 The Sons of the Serpent. Racist super-patriots who oppose all racial, ethnic, and religious minorities. And 100% homegrown.
"A terrorist is a terrorist even if he wears a green necktie and sings Danny Boy."
— Lord Marbury, The West Wing
Advertisement:

Basically, a group of terrorists who are mostly from the West (typically defined as the continents of North America and Europe, though Oceania and South America can also be included), and who are mainly influenced by cultural, political or religious ideas of Western origin. The trope may also cover a single individual. What makes someone "Western" can be rather hazy and difficult to define, since it is not simply a matter of where the person was born or grew up. Many Islamic terrorists, generally regarded as non-Western, lived the majority of their lives in the West, and for that matter many elements of Islamic culture — coffee, cookies and yogurt, for instance, were originally Arabic, Persian and Turkic foods, respectively — have profoundly influenced Western society and vice versa, making it tough to ascertain who is "Western" and who is not. Many countries in the Americas, especially in The Caribbean, have notable West and Central African and South Asian influences due to many of the inhabitants of those countries being descendants of African slaves and Indian laborers brought there by European colonists during the Atlantic slave trade, the United Kingdom has South Asian influences in it's culture due to the large amount of diaspora from the Indian subcontinent, and many Southern and Eastern European countries have Islamic influences due to the Moors, Arabs, Ottoman Empire, Persian Empire, notable Turkic minorities and the regions' close proximity to North Africa, the Middle East and Central Asia, with Kosovo, Bosnia and Herzegovina, Albania, Turkey, Azerbaijan and Kazakhstan even being predominately Muslim. Furthermore, several culturally and/or politically European countries (Turkey, Cyprus, Georgia, Azerbaijan, Armenia, Kazakhstan and Russia) have the majority of or all their land in Asia, and thus terrorists from those countries could be considered either Western or Eastern, depending on what part of the country they are from and/or whether you consider them European or Asian.

Generally, a "Western terrorist" is a terrorist fighting for something that has been an issue in the West for a long time - an ideological offshoot, for better or worse, of the legacies of the European feudal system, the Renaissance, the Enlightenment, or the scientific revolution launched in the seventeenth century, like anarchism, communism, Christian religion, environmentalism, nationalism, or racism, as opposed to an issue most strongly associated with another culture (like non-Christian religion, which of course raises the fascinating question of whether to classify Israeli terrorists as Middle Eastern or Western. Same with South African terrorists, which could be classified as either African or Western). Bear in mind that an apparently non-Western terrorist group may be secretly led by Western terrorists acting as The Man Behind the Man. For example, this would be the case if an apparent Islamic terrorist group turned out to be part of a secret neo-Nazi plot to provoke World War III (unlikely, yes, but stranger things have happened).

Creators may opt to draw from Real Life terrorism cases, from Anders Breivik to the Oklahoma City bombers Timothy McVeigh and Terry Nichols, to ETA's campaign and the long-running intercommunal strife in Northern Ireland, instead of the arguably more topical example of Middle Eastern terrorists. They may find Western terrorism more interesting than its counterparts in the rest of the world, simply because it is much more multidimensional in scope. Additionally, using Western villains often seems like an easy way of skirting any racial or ethnic Unfortunate Implications (though many Middle Easterners are of Caucasian descent, or at least look it). However, there is also danger with this approach: if used in improbable contexts, or to replace non-Western terrorists in an adaptation or update, the use of Western terrorists can start to look like a cheap case of Acceptable Targets or Politically Correct History.

Some groups of Western Terrorists that have appeared in media and news are various Animal Wrongs Group, whose actions have been dubbed eco-terrorism. There are also militia groups. Other examples include extreme nationalists, racial supremacists, violent leftists, religious radicals and separatist movements. The Troubles in Northern Ireland is a notable example - a definitely European dispute, with white Christians involved in sectarian violence which included riots and violence (on the other hand, the Irish Republican terrorist/resistance movement is definitely anti-colonialist, and anti-colonialism is usually thought to be a non-Western theme). A similar notable example are the conflicts between Russians and Chechen separatists in the Russian republic of Chechnya. In recent years, there are those who commit terrorism in the West as lone wolves without being affiliated with known established terrorist organizations; often they are psychopathic young people subscribing to some nihilistic ideology that makes sense only to them.

Another good source of Euro-villainy is the post-Soviet weaponmonger. This person may be a fascist, but usually they serve no cause other than the creation of chaos, a self-sustaining market for their endless supplies of nukes, viruses, and other deadly toys for their more ideologically minded customers to use on each other. In series where such black-market dealers and Corrupt Corporate Executives exist, they inevitably prove to be more dangerous than the Islamists/neo-Nazis/revolucionistas/etc. to whom they're selling weaponry. Newer ones however prefer to reinstall the old Soviet Regime without the communist ideals and instead aim for a rule resembling more that of Ivan the Terrible.

This trope should not be confused with partisans - resistance groups who fight regular military forces (in other words, guerrillas). Unlike terrorists, partisans are perfectly legal under international law - if and only if they have a chain of command, some means of identification from a distance, and carry their weapons openly. Otherwise, they are unlawful combatants. Note, this doesn't prevent characters from calling their attacks terrorism despite their legal legitimacy. Partisans are covered here on TV Tropes as La Résistance. To be a true terrorist, one must both be ideologically motivated and engage in what is widely recognized as violent criminal behavior.

Partially Truth in Television, in the United States; you are seven times more likely to be killed by a homegrown political extremist than an Islamic fundamentalist. In fact, the most common form of American terrorism is by environmental extremists, though usually this doesn't harm anyone (since they avoid it).

Includes Western Terrorists Without a Cause, and Corrupt Corporate Executives.

Note, the trope does not cover all reactionary militias. Only those who conduct violent, illegal actions to further their ideology count as examples.

Typically Soviet-supported Dirty Communists, but other left-wing radicals are also possible, such as Bomb-Throwing Anarchists.

Also includes Animal Wrongs Groups who engage in terrorism. Generally thought to be on the Left, but usually not socialist or communist.

A MI5 briefing conducted on the right-wing group known as "The Sons of Albion".

A MI5 briefing conducted on the right-wing group known as "The Sons of Albion".