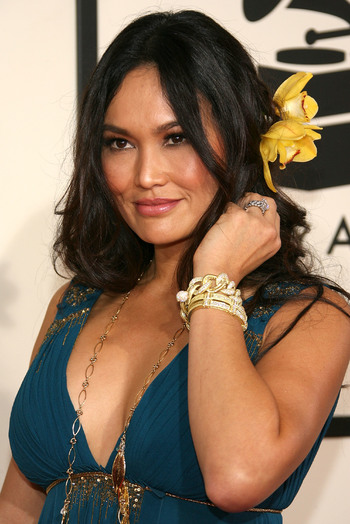 Althea Rae Duhinio Janairo (born January 2, 1967), known professionally as Tia Carrere, is an American actress, voice actress, singer and model who obtained her first big break as a regular on the daytime Soap Opera General Hospital in 1985 as Jade Soong.

She's most famous for playing Cassandra in Wayne's World and its sequel, and as Sydney Fox in Relic Hunter.

As a voice actress, she's known for being the voice of Nani Pelekai in Disney's Lilo & Stitch franchise and as The Martian Queen Tyr'ahnee in Duck Dodgers.

She is of Chinese, Filipino, and Spanish descent. She married photojournalist Simon Wakelin in 2002, with whom she had a daughter, Bianca, born in September 2005. The couple divorced in 2010, both sharing custody of their daughter.