Series / Friday the 13th: The Series 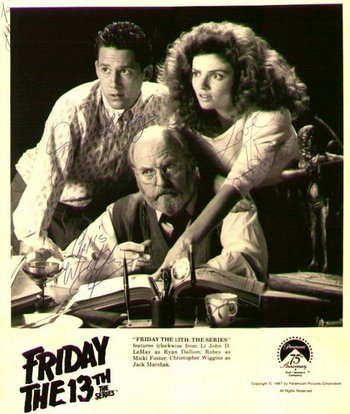 "Lewis Vendredi made a deal with the devil to sell cursed antiques. But he broke the pact, and it cost him his soul. Now, his niece Micki and her cousin Ryan have inherited the store... and with it, the curse. Now they must get everything back—and the real terror begins."
— The Opening Narration
Advertisement:

Despite its title, Friday the 13th: The Series (1987–90) had nothing to do with Jason Voorhees or any of the characters or events of the Friday the 13th movies. It instead followed Micki Foster (Louise Robey) and Ryan Dallion (John D. LeMay) as they attempted to track down all of the cursed artifacts that their uncle Lewis Vendredi (R.G. Armstrong) had sold out of his antique shop as part of his Deal with the Devil.

After their uncle broke the pact and the Devil claimed his soul, Micki and Ryan inherited "Vendredi's Antiques" and renamed it "Curious Goods." It became their base of operations as they set out to reclaim all of the cursed antiques with the help of Jack Marshak (Chris Wiggins), a childhood friend of their uncle. Marshak was an expert in the occult who had acquired many of the antiques for Vendredi during his world travels, and therefore was often familiar with the historical backstories of the objects, which frequently tied into their magical attributes.

Typically an artifact would grant some supernatural power to its owner, but the price of using the power would all but inevitably be someone's life. There was the scalpel that could be used to cure any disease after it was used as a murder weapon, the scarecrow that would produce good crops after killing three sacrificial victims, etc. At the start of the third season, Ryan is replaced by Johnny Ventura (Steve Monarque), one of his contacts who often ends up as The Watson of the protagonists.

A textbook case of Gotta Catch Them All.