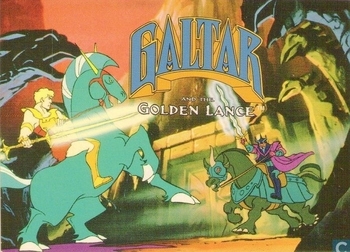 Galtar and the Golden Lance (1985) was one of the first three series in The Funtastic World of Hanna-Barbera. After his village is ravaged by Tormack's hordes, Galtar sets out after the evil warlord for revenge. In his quest, he discovers a kingdom conquered by Tormack, and there meets Princess Goleeta, whose magical Golden Shield was amid the loot Tormack took for himself after slaying her parents and claiming the kingdom. The two join forces and claim the Golden Lance, a powerful enchanted weapon, from amidst Skull Forest. Goleeta's younger brother, Zorn, soon joins the quest to defeat Tormack and recover her shield.

Galtar and the Golden Tropes: