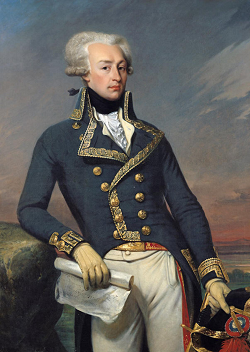 Who's the best? C'est moi!
Advertisement:

A French nobleman born to rank and privilege in the decadent era before the The French Revolution, he heard the political theories in France that would later form the basis for that revolution and adopted them. He traveled against orders to the Americas, obtained a commission as a Major General from the Continental Congress, and was George Washington's chief aide for most of the The American Revolution.

Emotionally, Lafayette was also the closest thing the childless George Washington ever had to a son.note Alexander Hamilton being the next-closest, but only distantly. However, the two were good enough friends that Hamilton never begrudged Lafayette his place in Washington's paternal affections. Conversely, Washington was the closest thing Lafayette had to a father, his biological father having been felled by a cannonball in the War of the Polish Succession less than a month before he turned two. Lafayette also had that rarest of 18th-century-noble blessings—a wife (Adrienne de Noailles) who well and truly loved him and whom he loved completely.

Got a Big Damn Heroes when he disappeared for a bit to only show up again with the French Fleet, blockading the British Fleet and their troops causing them to surrender and win the American War for Independence. Very well liked, he helped in the Treaty of Paris that ended the war and proceeded to find two new causes, Abolitionism and reform in France. He led parts of the early French Revolution to try and reform the system, but lost when the Jacobins became too powerful to ignore. Spent parts of the period imprisoned, then in political exile. He refused offers to govern Louisiana in order to attempt to reform France.

Eventually his efforts led to him being Offered the Crown, but he declined.

Very well liked by Americans, where nearly every state has a town of Lafayette or Fayetteville, if not a county, street, or school. When Colonel Charles E. Stanton reached Lafayette's tomb after arriving to aid the French in World War I, he was moved to say "Lafayette, we are here." Even before America officially entered the war, American servicemen joined the French in a company named for him. During his lifetime he was granted citizenship in the new country, and two hundred years later he was once again granted honorary American citizenship.

Because of his American fame, few people (even in France) realise that he had a political career beyond that, yet if you squint, you can see him in a National Guard uniform in paintings depicting the July Revolution of 1830, to give an idea of his longevity.

Initially a supporter of the Revolution, he quickly found himself under suspicion after the Champ-de-Mars massacre in July 1791, where he was in command. He fought in the North in 1792, but in August, he was denounced as a "Traître à la patrie" (traitor to the homeland). He escaped from the French army, which saved him from being guillotined like fellow noble generals Custine or Beauharnais, but he was captured by the Austrians and spent the next five years in custody of the Austrians, then the Prussians, despite American protests. His release was actually one of Napoléon Bonaparte's condition for the Treaty of Campo-Formio that ended his first Italian campaign; but Lafayette was forbidden to go back to France, and Napoleon was quite hostile to him.

In 1800, though, Lafayette decided that he had had enough of exile and came back to Paris. His friendship with Joseph Bonaparte and his decision to settle some distance away from Paris somewhat eased the tension between him and Napoleon, though Lafayette refused many of the prestigious positions Napoleon offered him, including the French embassy in America because, as he said, "I feel too much like an American to go to the United States as a foreigner". A partisan of democratic institutions, he voted against the Consulate for Life and the Empire. He remained mostly idle during the Empire, but Napoleon kept an eye on him; this was one of the reasons why he did not go back to the United States during that period, fearing that he would not be allowed to return to his beloved France.

Lafayette welcomed the return of the Bourbons in 1814, but the feeling was not mutual: he was not forgiven for having Revolutionary convictions. (We should note here that he was never a strong supporter of the Republic, if he ever truly supported the Republic at all; he was a leader of the liberal nobility. While he thought a republic suited the United States wonderfully, he like most liberal nobles and other Enlightened well-off Frenchmen though France would be better served by a liberal constitutional monarchy—which the Restoration regime most emphatically was not.) He rose to prominence again at the end of the Hundred Days, when the government learned of Napoleon's defeat in Waterloo. He spoke to the Assembly, urging them to rally behind the tricolour flag and give power to the Duke of Orleans. However, he was fifteen years early: for the moment, the Bourbons returned again and although he sat in Parliament as a member of the far left, he did not do much under Louis XVIII and Charles X. He did take advantage of his forced inaction to go back to America, where he spent almost one year, receiving a hero's welcome everywhere he went.

In 1830, when a popular insurrection ousted Charles X, he played a major role in the transition between the Bourbon and Orleans dynasties. As one of the de facto leaders of the insurgence, he presented Louis-Philippe with their demand: "A popular throne surrounded by Republican institutions;" when Louis-Philippe assented, he gave the Orléanists his blessing, later known as the "Republican kiss" that allowed republicans to support the July Monarchy. However, Louis-Philippe's attempts to strengthen his power quickly disillusioned him, pushing him once more into opposition. In 1832 he marched in the funeral of his friend and fellow leftist general Jean Lemarque, but his urging the crowd to remain calm went unheeded, resulting in the June Rebellion depicted in Les Misérables. He remained politically active until he died on 20 May 1834 from a bladder disease. The Americans demonstrated their admiration for him once more, by giving him the same funeral honours as they had for Washington.