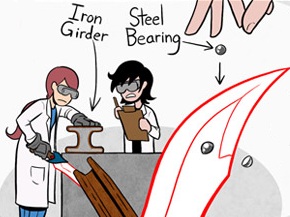 A blade made from one of Coyote's teeth. Technical analysis: "really damn sharp".
"The Sword of Heroes! Said to be so sharp you can cut yourself just by looking at — Ow!"
— Po, Kung Fu Panda
Advertisement:

Absurd Cutting Power is the ability to slice and dice things that would normally be able to resist being cut. There are any number of ways to achieve this — technology, magic, extremely high-quality blades, or an incredibly skilled character doing the cutting are all possibilities. Usually involves lots of Clean Cuts and Single Stroke Battles. Expect to find that Like Cannot Cut Like — something with absurd cutting power usually won't be able to cut something else with absurd cutting power.