Fanfic / Thieves Can Be Heroes! 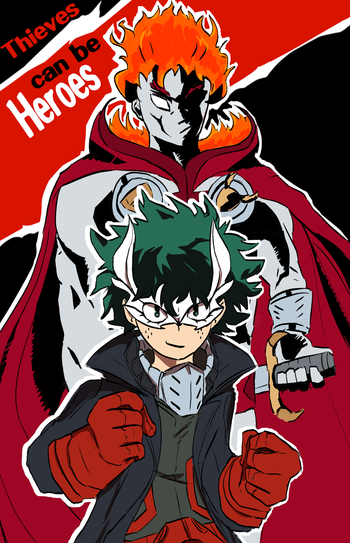 "I guess thieves can be heroes, too." note All credit for the image goes to its original owners

Izuku Midoriya thought he was doing the right thing when he ran down that alleyway to save a woman who was being molested by a drunken man. After all, what kind of Hero could ignore a cry for help? But that man had connections, and the would-be hero soon found himself charged with assault and sentenced to probation in Tokyo for his "violent" act.

It's one thing to become a Hero when you're Quirkless, it's another thing entirely when you also have a criminal record.

With his hopes of achieving his lifelong dream dashed, Izuku gets shipped off to live with a family friend while attending Shujin Academy and serving out his probation, seemingly destined to be forever branded a thug for what he thought would be an act of heroism.

But the gears of fate turn in strange ways. After getting lost on his way to his new high school, the Quirkless teen is soon sucked into the Metaverse, where he would have been killed if not for the awakening of a strange power within him called a "Persona". Now dealing with forces far beyond the world of Heroes and Villains, the once powerless boy soon finds that even Phantom Thieves can be heroes in their own right.

Thieves Can Be Heroes! is a My Hero Academia and Persona 5 Fusion Fic written by Mugiwara N0 Luffy. With a Quirkless Izuku taking the place of Persona 5's protagonist, it follows his journey towards becoming a Phantom Thief and using his newfound abilities to unravel the mysteries and conspiracies in Tokyo while doing as much good as he can along the way.

It can be read on Fanfiction.net here

; the first 22 chapters are also available on Archive of Our Own here

Thieves Can Be Heroes provides examples of: