Our Wights Are Different 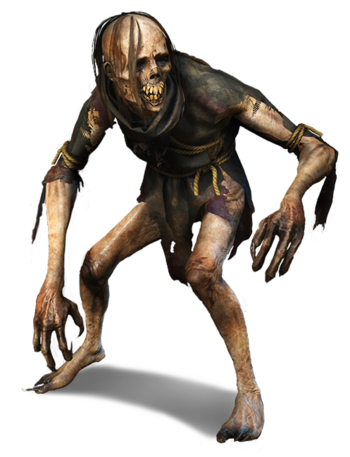 Like ghouls, gnomes and trolls, "wights" are a kind of supernatural creature whose details no one quite agrees on. Usually evilly affiliated and somehow related to The Undead, but even that is up for debate. Can be an umbrella term for any magical creature, and occasionally a wight is a poorly understood, vaguely undead creature in-universe as well as in its description.

The word comes from a Middle English word meaning literally 'being' (or by extension, 'person'). Although it may occasionally be applied to supernatural creatures, most historical uses are about people (as in, humans).

In much of modern fantasy (specifically of the Medieval European Fantasy variety), wights are a kind of undead. This is owed to The Lord of the Rings, in which "barrow-wights" appear as undead creatures haunting gravemounds. In this, J. R. R. Tolkien was inspired by the 1869 translation of the Icelandic Grettir's Saga by William Morris and Eirik Magnusson, which used 'barrow-wight' once to translate the Old Norse haugbui, which is a type of undead (namely, the living corpse of a man buried in a barrow, intent on defending his residence from graverobbers and trespassers). Following that trail, Dungeons & Dragons and other works of the fantasy genre have loosely based their concept of 'wights' on the haugbuar and draugar, the undeads of the Icelandic sagas. Many modern fantasy works, therefore, use 'wights' as more or less a stand-in for zombies, especially in settings where calling them zombies would seem out of place.

Has nothing to do with the Isle of Wight nor wrestler Big Show (whose real name is Paul Wight, but don't call him that).