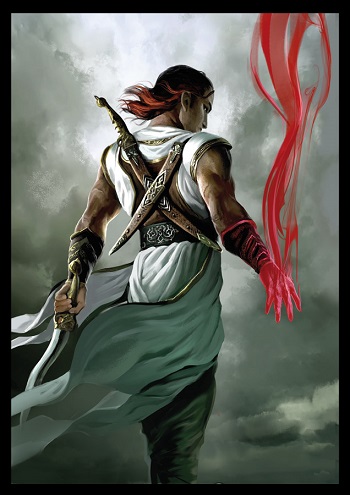 Artwork by Miguel Coimbra
The Lightbringer Series is a series of fantasy novels by Brent Weeks, the author of The Night Angel Trilogy.
Advertisement:

The Lightbringer Series takes place in a different setting than the Night Angel Trilogy, in a world known as the Seven Satrapies. The main character of the story is a young boy named Kip, an orphan from a backwater village in a war-torn country who is suddenly thrust into an increasingly dangerous series of events upon learning that his father is actually the Prism—a widely famous and powerful religious leader, considered to be emperor of the entire world. Like Brent Weeks' other series, this one introduces a castle of fascinating and unique characters and a world that, while not as dark or gritty as the Night Angel Trilogy, still paints a unique picture of a fantasy world.

The series is now complete, and consists of:

Interestingly, the author was worried about the series, which he had planned as a trilogy, and consequently named it "The Lightbringer Series" in order to avoid Trilogy Creep.

Not to be confused with Oliver Johnson's Lightbringer Trilogy, an older, entirely different series made up of The Forging of the Shadows,The Nations of the Night and The Last Star at Dawn.