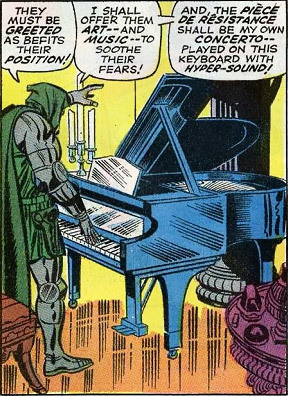 Doom is such a considerate host. The last bit, though...
"I'm the bon vivant of violence, a licensed psychiatrist
Who dines on highest society to the sound of violins!"
— Hannibal Lecter, Epic Rap Battles of History
Advertisement:

It's not that Evil Is Cool. Rather, this is more like "Evil is Intellectual". Evil is smart, wicked, sarcastic with a biting sense of humor. Evil is smooth and eloquent, if not outright suave. Evil dresses well, has a polysyllabic lexicon, quotes William Shakespeare, sips fine wine, listens to his favorite opera on his downtime (almost always Don Giovanni), and in general is shown to be cultured if not necessarily civilized. This can apply to any villain, Anti-Villain, or associated character types.

May overlap with Dumb Is Good, but it doesn't have to. The hero of the story can easily be a more rugged intellectual, or he reads/writes poetry, which is almost never perceived as an "evil" form of culture (cf. the Warrior Poet trope). Closely related to the Magnificent Bastard, whose sheer tactical and strategic brilliance often sets him inside the trappings of Wicked Cultured (particularly when he catches you and then explains which strategic genius first invented that trap). Faux Affably Evil is a similar overlap of highbrow manners and vicious actions. Villains who try to be this and fail are Wicked Pretentious.

When Aristocrats Are Evil, they almost always follow this trope; when enough of them do, you get a Decadent Court. They are likely to practice Brains and Bondage without any trace of Safe, Sane, and Consensual. Likely to be a Villain in a White Suit as well. If there's a pair of Wicked Cultured villains, they'll often be Bantering Baddie Buddies.

A Wicked Cultured villain will naturally be associated with equally cultured music, with their most likely Genre Motif being classical music. Their Mood Motifs tend to be either harpsichords or, for more grandiose variants of this trope, Ominous Pipe Organs. Villains that are particularly passionate about music would probably enjoy Conducting the Carnage.

This trope often carries some implication of Slobs Versus Snobs: people who enjoy pop culture are average joes and probably the protagonists, but those who like "high" culture are a bit weird, "other", and more likely to be antagonists.

Compare the less sinister Villains Out Shopping, Villainous Fashion Sense, and Man of Wealth and Taste. The exact opposite of this is a Gentleman and a Scholar (unless he is Affably Evil). Someone who keeps trying to be this but whose plans end up less clear, simple, and effective may have a Complexity Addiction.

Not to be confused with Sophisticated as Hell, although overlap is possible.

A criminal mastermind with a fondness for the works of Schubert, Professor James Moriarty decides to enjoy a recording of "Die Forelle" while torturing Sherlock Holmes with a meat hook.

A criminal mastermind with a fondness for the works of Schubert, Professor James Moriarty decides to enjoy a recording of "Die Forelle" while torturing Sherlock Holmes with a meat hook.