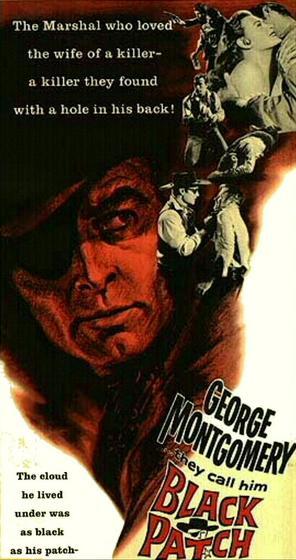 Black Patch is a 1957 American Western film directed by Allen H. Miner and written by Leo Gordon, who also plays a supporting role. The film stars George Montgomery and Diane Brewster, and is the first film featuring a musical score by Jerry Goldsmith.

A New Mexico Town Marshal, Clay Morgan, known as 'Black Patch' since he had lost an eye in The American Civil War, takes his job seriously, especially after an old friend, Hank Danner, arrives in town with his wife, Helen, who formerly loved Morgan. Danner is suspected of a bank robbery and Morgan has to arrest him. Crooked saloon-owner, "Frenchy' De Vere, sees a chance to get the bank loot, and he helps Danner escape and then kills him. Morgan is accused of the killing but nothing is proved and the bank money remains missing. Carl, a young man who Danner had helped, goes to Helen, who also thinks Morgan killed her husband, and gets Danner's gun and starts practicing with it until he becomes the fastest gun in town, with one possible exception... Morgan, the man he intends to kill.