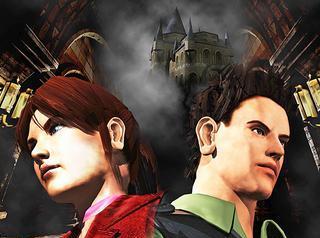 The Redfield siblings, in their first game together.

Three months after the nuking of Raccoon City, Umbrella is still busy making bioweapons despite a minor setback or two. Claire Redfield, still on the hunt for her missing brother, Chris, is nabbed while infiltrating a Umbrella facility in Paris. They promptly ship Claire to Rockfort Island, a prison complex located somewhere in the South Seas; while Claire rots away in solitary, an unknown party bombs the island and sets off yet another T-Virus outbreak. Aided by fellow prisoner Steve Burnside, Claire searches for a way off the island while being stalked by the other survivor: Alfred Ashford, the demented former warden of the prison.

Meanwhile, Chris, who was alerted to Claire's arrest, comes out of hiding and makes landfall at Rockfort, where he bumps into the leader of the assault: Albert Wesker, who was thought to have perished during the Mansion Incident. But Wesker isn't after the Redfield siblings; rather, he wants the cryogenically-preserved body of Alfred's (even crazier) sister, Alexia.

Code: Veronica marks the series' leap into full 3D environments, with nary a pre-rendered background in sight. RE veterans were fairly nimble at the Tank Controls by now, but Code: Veronica is probably the hardest to control due to an awkward camera and the lack of a dodge mechanic. The key is to run past enemies and use the knife, which is crazy-strong for this very reason. The alternate scenarios of the PlayStation era bid their farewell, at least until Resident Evil 6: Rather than picking which character to control at the start, Code: Veronica opens from Claire's perspective before switching to Chris' for the second half.

Originally a Dreamcast exclusive (hence the lack of a numbered title), and the final Resident Evil game to be released on a Sega platform, it was ported to PlayStation 2 a year after its initial release in 2000; this updated edition, subtitled Code: Veronica X, was ported the Nintendo GameCube in 2003. An HD version was later released for the PlayStation 3 and Xbox 360 in 2011.