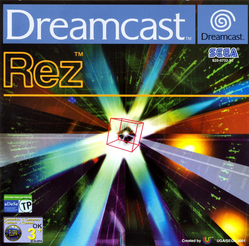 Rez is a Rail Shooter produced by Tetsuya Mizuguchi and developed by Sega that's set in a futuristic computer supernetwork called the K-project where much of the data flow is controlled by an AI named Eden. Eden has become overwhelmed with the amount of knowledge gathered on the network, and then a virus infects her, causing her to doubt her existence and enter a shutdown sequence, which will mess things up big time since society as a whole depends too much on technology. The player takes the role of a hacker logging into the K-project system to reboot Eden while destroying any viruses or firewalls that happen to inhibit progress, and analyzing other sub-areas of the network to gain access to Eden's location. With visuals heavily inspired by the Russian painter Wassily Kandinsky, the game's music and sound react to the player's actions in a way that allows you to partially compose the Background Music as you play.

Rez was released on both the Sega Dreamcast and the PlayStation 2 in November 2001 in Japan, and in early 2002 in Europe and North America (though North America did not get the Dreamcast release). Due to its weak sales, it soon became a rare gem. However, thanks to the release of Rez HD on Xbox Live Arcade in 2008, anyone with an Xbox 360 and access to Xbox Live can now not only enjoy the game for 10 dollars (at least in the U.S.), but with even more stunning high-definition visuals and discrete 5.1 channel audio as well. Rez Infinite was released for the PlayStation 4 in October 2016, and utilizes the PlayStation VR headset to immerse players further into the world of Rez. Enhance Games, founded by Mizuguchi, is handling the port, which now supports 1080p visuals, 7.1 audio, and allows 120 frames-per-second on the VR headset. This version was later brought to Steam in August 2017, with higher resolution textures and maintaining VR support, now using the Vive or Oculus Rift.

The game received a prequel, Child of Eden, also produced by Mizuguchi and developed by Q Entertainment in 2011. The game was first released for the Xbox 360, utilizing Microsoft's Kinect interface, and was later released for the PlayStation 3 which also utilized the Playstation Move motion controllers. It is about eliminating viruses in order to secure the first AI "birth", Lumi, the AI duplication of the first space-born human girl.