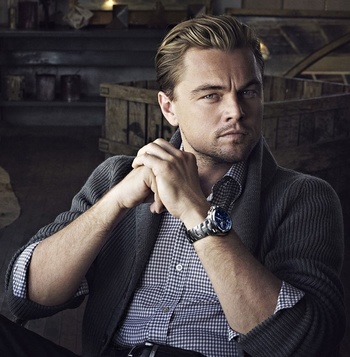 "Gentlemen, you had my curiosity... but now you have my attention."
"I'm the king of the world! Woo-hoo-hoooo!"
— Jack Dawson in Titanic
Advertisement:

Leonardo Wilhelm DiCaprio (born November 11, 1974) is an American actor and film producer who is one of the biggest movie stars in the last thirty years, and among the most famous and respected actors of his generation.

His career began with his role in the television sit-com Growing Pains. He then started appearing in independent movies in The '90s. His critically acclaimed breakthrough film performance came in This Boy's Life (co-starring his hero Robert De Niro who apparently informed Martin Scorsese about the precociously talented young man). He then quickly followed with What's Eating Gilbert Grape. His performance as the mentally handicapped brother of Johnny Depp, in the title role, brought him nominations for the Golden Globe and Academy Award for Best Supporting Actor. He then gained global fame for his role in Romeo + Juliet.

His role as Jack Dawson in James Cameron's Titanic (1997) however made him, overnight, into one of the biggest movie stars. In the immediate aftermath of Titanic, DiCaprio struggled for a few years with some ready to dismiss him as a flash-in-the-pan until 2002, where he appeared in two films by major directors — Gangs of New York and Catch Me If You Can. This marked the start of the current and most successful phase of his career, where he acts in intense roles collaborating with auteur directors, many of them built on shedding his romantic dreamboat image that he had accidentally sustained.

He has collaborated most often with fellow Italian-American Martin Scorsese. This partnership has earned comparisons to the earlier working relationship between Scorsese and Robert De Niro for the simple fact that they are the only two actors Scorsese has worked with repeatedly as lead roles in multiple films. Their collaboration has been mutually beneficial, with DiCaprio's critical reputation changing from a Pretty Boy to a talented actor who had a greater emotional range than many expected and who could also project an uncommon intensity. Scorsese for his part, thanks to collaborating with a major star, managed to score a string of hits (every one of their films has been profitable), with The Departed winning him the Oscar for Best Director while The Wolf of Wall Street became the biggest box office grosser of his career. He's also attached to play Theodore Roosevelt in Scorsese's long-gestating biopic that currently doesn't have a release date but is expected to be his next project after the 2020 filmed Killers of the Flower Moon.

DiCaprio has appeared in a lot of Period Pieces, doesn't seem to be interested in acting in big franchise films, and tends to die in many of his movies. He's an environmentalist, and produced and narrated a documentary, The 11th Hour about environmental issues.

At the 88th Academy Awards which took place on February 28, 2016, he finally received an Academy Award for Best Actor for his performance in The Revenant after previously being nominated four times (three times Best Actor, one time Best Supporting Actor). Amusingly, much the same thing happened to his Titanic co-star Kate Winslet, who was nominated for five different Academy Awards (three for Best Actress, two for Best Supporting Actress) before she finally won one for The Reader in 2009, leading some fans to jokingly suggest that Titanic was cursed.

Movies or TV series he starred in: