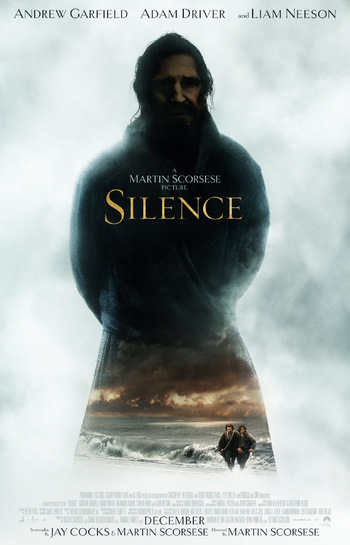 "The price for your glory is their suffering."
"I pray but I am lost. Am I just praying to silence?"
— Padre Sebastião Rodrigues
Advertisement:

Silence is a 2016 Epic Historical Fiction drama film directed by Martin Scorsese, who also co-wrote the screenplay with Jay Cocks (his longtime collaborator).

In the 17th century, the Jesuit mission in Japan is facing severe setbacks from the Tokugawa Shogunate who is not only persecuting Japanese Christians but making them apostatize. One of their priests, Father Ferreira (Liam Neeson), a respected member of the clergy, has already apostatized and is currently helping the government persecute Christians. In response to this shocking turn of events, two young Portuguese Jesuit priests, Father Sebastião Rodrigues (Garfield) and Father Francisco Garupe (Driver) are dispatched to learn what happened to Ferreira and to continue the mission of preaching Christ's message to the persecuted Japanese Christians.

The film was released on 23 December 2016. The trailer can be seen here.