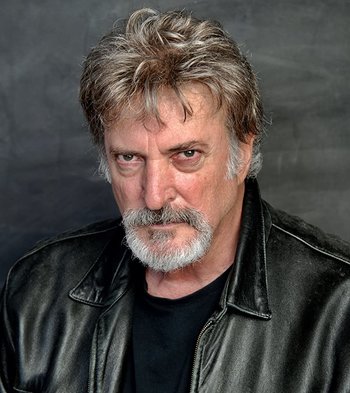 OH MY GOD!!! Richard Epcar can break you in two!

But enough stubs, let's get on with the article.

Richard Michael Epcar (born April 29, 1955) has been acting for well over 30 years, starting out in theater (as the Count himself in Dracula, among others) before moving into television and voice acting. While still relatively new at voice acting, Richard already had a few years under his belt by the time that he was introduced to his first anime, Robotech. He is best known for his portrayal of Batou from Ghost in the Shell and Ghost in the Shell: Stand Alone Complex, which he considers to be his all-time favorite role, and has appeared in numerous anime and video games. His deep-yet-laid back voice and considerable range has proven to be perfect for playing badasses, Large Hams, and the occasional mentor and father figure.

He is also an ADR director, doing such works as Lupin III, Noein, Bobobo Bo Bobo Bo, and Rise of the Planet of the Apes.

Outside of voice acting, Richard has appeared in television shows such as Matlock, Columbo, and Babylon 5; movies such as 1992's Memoirs of an Invisible Man and Gunfighter in 1999, commercials for Coke Zero, and other media.

In 2008, he started up a voice production company "Epcar Entertainment, Inc" with his wife Ellyn Stern. He's also a drummer for the LA River Band, and a huge fan of James Bond.

You can find him on his personal website here.