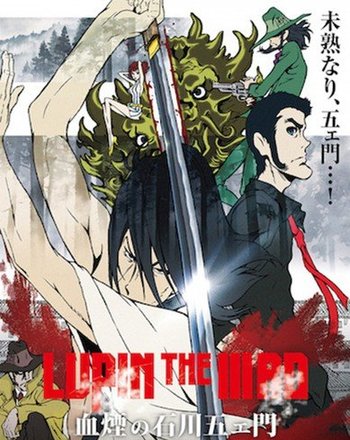 Goemon Ishikawa's Blood-Spraynote 血煙の石川五ェ門 (Chikemuri no Ishikawa Goemon) is a 2017 film that is the second sequel to Lupin III: The Woman Called Fujiko Mine; it follows Daisuke Jigen's Gravestone and has the same director and writer, Takeshi Koike and Yuuya Takayama, respectively. This movie, has Lupin wearing a black jacket at the start of the film, but then for the rest of the story he only has on his black undershirt.
Advertisement:

Following the events of The Woman Called Fujiko Mine, Goemon Ishikawa XIII has taken a new job, as a bodyguard for a Yakuza boss named Inaniwa. While aboard the Inaniwa clan's splendid gambling ship, a rival gang tries to make trouble and Goemon uses his skills to save the boss from an assassination attempt, earning Goemon the boss's glowing praise and causing the gang's more established members a great deal of resentment. Meanwhile, in the ship's vaults, Lupin III, Daisuke Jigen, and Fujiko Mine are working on lifting as much money as possible from the gang's coffers. When the ship begins shaking, Goemon goes down to investigate and finds a massive bearded man with metal teeth working on destroying the ship's engines with two heavy hatchets. The intruder causes the ship to explode; in the ensuing chaos, Inaniwa dies, Lupin and company manage to escape, and the mystery man abandons the ship and goes after Lupin's group when he spots them.

The next day, Inspector Kouichi Zenigata arrives at the burned out ship, seeking the bearded man. His name, as both Zenigata and Lupin independently find out, is Hawk, also known as the "Ghost of Bermuda". He was an accomplished mercenary thought to have died in a mission gone wrong; instead, he seems to be alive and well, superhumanly powerful, and dead set on killing Lupin, Jigen, and Fujiko. While the Lupin and company get drunk and celebrate their robbery, Goemon goes to Inaniwa's funeral to pay his respects and ask for forgiveness for his failure to protect the man; the boss's son and guards, already loathing Goemon after he so easily showed them up, give the samurai one week to track down and find the boss's killer. A further encounter with Hawk leaves Goemon stunned and doubting his abilities. As the week counts down, Goemon begins a brutal training like he never has before. Because the next time he and Hawk meet, only one can be victorious…

Like Jigen's Gravestone, the movie was split into two parts on initial release. Both halves were released on DVD in Japan on May 26, 2017. Discotek Media released the film on Bluray and DVD with an English dub on September 24, 2019.