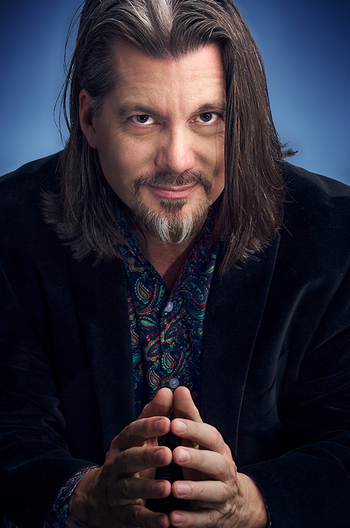 Silence! No one's allowed to do as they please on my trope page!
Advertisement:

D.C. Douglas (born February 2, 1966) is an American voice actor born in Berkeley, California. He used to be a stage performer before becoming a voice actor. While he did do some voice acting, it was mostly on the minor side, but he gained fame when he voiced Albert Wesker and Legion. His role as Wesker is so famous that he pretty much propelled himself into being a fan-favorite voice actor in a short period of time.

He got into trouble

when he left a voice mail for a Tea Party group called Freedom Works, but he fought back with one heck of a Take That! (and a healthy dose of sarcasm) with this video.

He also does occasional live acting for TV shows and films from The Asylum.

Those tropes will be released into the atmosphere, ensuring complete. Global. SATURATION.

Now that you know about my career, I have no choice but to eliminate you. Killer Queen has already left his mark at the bottom of this page. *click*
Or maybe it was meant to be something else entirely...
Listing trope indices.