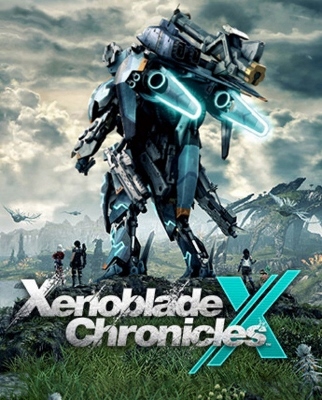 We're all the same, even if from another world. Even if we look different, we are still humans. That is why we are called the "human race".
—Martin Luther King Jr.
"Together, we resolved to forge a new way of life here on Mira, come what may. New LA was our beautiful lie to ourselves... Truth is, we were adrift, heading into the unknown. Our native home was gone, swallowed in a shroud of light, and our future was uncertain: we had no idea what fate lay in store for us... only that we had to keep living in order to see it."
— Lin Lee Koo
Advertisement:

Xenoblade Chronicles Xnote  simply Xenoblade X in Japan is a Spin-Off of the Xenoblade Chronicles series, set in a Science Fiction-type Alternate Universe, which includes (but not limited to) Humongous Mecha, laser swords, aliens, intergalactic conflicts, and giant monsters. It is the second overall game in the series.

In 2054, two alien fleets join in battle near Earth. The collateral damage devastates the planet's surface, and forces humanity to evacuate the planet before it is completely destroyed.

Two years later, one of the surviving Colony Ships — the American White Whale, holding the city of New Los Angeles — is caught and attacked by one alien faction. The White Whale survives long enough to break apart over a hospitable planet: Mira, scattering important components, the cryonically-suspended crew, and the city itself across the planet's surface. Months later, your player-created character is found and brought to New Los Angeles where you join BLADE—NLA's defense force, dedicated to Builders of the Legacy After the Destruction of Earth. A few small complications arise shortly after landing, most notably the gigantic and bloodthirsty Miran wildlife capable of turning NLA into a pile of rubble. And it only gets worse for BLADE from there.

With character designs by Kunihiko Tanaka (Xenogears and Xenosaga)note with this game being his final work as lead character designer for most of the Xeno meta series before leaving Monolith Soft, music by Hiroyuki Sawano (Kill la Kill and Attack on Titan), and directed by long-time series head Tetsuya Takahashi, Xenoblade Chronicles X is the (thematic) sequel to the cult Wii hit Xenoblade Chronicles, developed by Monolith Soft for Wii U and published by Nintendo, released in Japan on April 29th, 2015, and on America and Europe on December 4th, 2015.