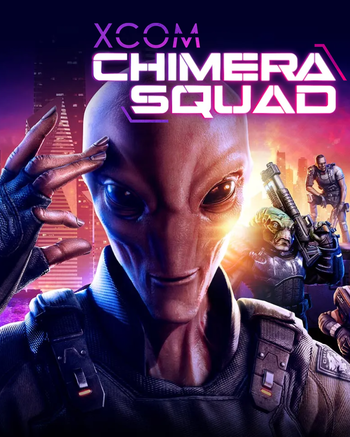 The future of City 31 depends on you.
Advertisement:

Five years ago, the remnants of XCOM staged a revolution against the alien armada that occupied Earth for twenty years. Humans were not the only species who found freedom, though: without the psionic influence of their Elders, the surviving alien occupiers regained their free will. Whether out of self-preservation or a genuine desire to do good, most of these aliens chose peace, helping rebuild the world they ravaged.

The crowning achievement of this unification is City 31, a diverse and prosperous urban center that survived the revolution by banding together against ADVENT. But this newfound peace is fragile: criminals and extremists lurk in the shadows, taking advantage of the troubled reconstruction effort to advance their agendas. Standing against them is Chimera Squad, XCOM's new counter-terrorism unit. Consisting of six humans and five aliens from a wide array of backgrounds, their mission is to bring down these underground organizations, and keep City 31 from falling into anarchy.

Chimera Squad is something of an experiment in the series, being more of a small-scale Strategy RPG than the brutal, globe-spanning tactical experience of previous games. Rather than commanding an entire Redshirt Army that can die by the truckload, you operate a squad of set characters with distinct names, personalities, and abilities. While these characters can be temporarily taken out of commission by serious wounds, their death will result in a mission failure, forcing you to retry.