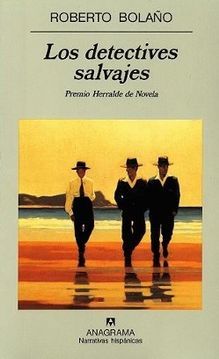 “Finally the Work journeys irremediably alone in the Great Vastness. And one day the Work dies, as all things must die and come to an end: the Sun and the Earth and the Solar System and the Galaxy and the farthest reaches of man's memory. Everything that begins as comedy ends in tragedy."
Advertisement:

The Savage Detectives is an 1998 novel, Chilean author Roberto Bolaño’s epic on the life of storytellers. It is a Doorstopper novel made almost exclusively on Alternate Character Interpretation, Offscreen Moment of Awesome, Big-Lipped Alligator Moment and oddly enough, realistic consequences. The book is divided on three parts. All three sections are somewhat stand-alone, but only as a whole the point of the book can be understood. The events take place in the period 1976-1996.

The first part is called Mexicans Lost in Mexico. Guess where it takes place. Juan García Madero is a 17 year old in Law College. In a Literature Class, he meets Ulises Lima and Arturo Belano, the founders and leaders of the visceral realists, a group of young postmodern poets. Impressed by Garcia Madero’s encyclopedic knowledge on archaic literature terms, they eventually allow him to join the visceral realists and meet the rest of the group. Garcia Madero eventually leaves college and becomes a poet, while trying to figure at the enigma that are Ulises and Arturo, who appear to be searching the trails of a little know poetress known as Cesarea Tinajero, the original founder of the visceral realists which Arturo and Ulises would later refound. At the end of this part, through a tad complicated series of events Ulises, Arturo, Garcia Madero and teenage prostitute Lupe escape in a classic car from a group of corrupt cops led by an angry pimp.

Thus the second part starts and things get kinda complicated. This section, taking up about 400 pages and spontaneously called The Savage Detectives, is formed exclusively by proto-interviews made by an unnamed person who is looking information on Arturo, Ulises and the rest of the visceral realists throughout the next 20 years. Garcia Madero appears to have ceased to exist. Each chapter is made by several narrations by different characters on the most diverse locations (some of the actual visceral realists narrate at times, but never Ulises, Arturo or Garcia Madero) each telling their own experience with the main characters, never to the point and always according to their personal view of the character in question. Throughout a span of 20 years, we follow the visceral realists as most of them try to continue their literary careers or plainly continue on surviving, with an emphasis in the weird travels of Belano and Lima throughout most of Europe.

The third part returns to the exact ending of the first part, and is titled On the Deserts of Sonora. Arturo, Ulises, García Madero and Lupe escape from their deaths while searching for the mysterious Cesarea Tinajero. Don’t expect much closure on anything though. Known for the ultra-enigmatic ending and for leaving the Riddle for the Ages “What is behind the Window?”. That doesn’t make more sense on context.

The novel became the lovebird of every single Spanish-speaking literary critic shortly after the death of its author. It was soon translated to English, though a lot of inside jokes may be inexplicable for someone without a degree on Spanish Literature, English-speaking or not. Specially loved by authors, as it is perhaps the most accurate depiction of young artists in the present day and the lives they often live. And not just the nice or even the dramatic side of it.