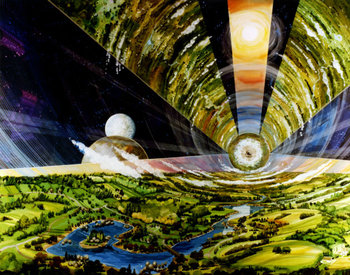 Artist's conception of the inside of an O'Neill Cylinder (NASA)
Advertisement:

Your homeland is starting to feel like not such a great place to live. Maybe it's overpopulated. Maybe it's polluted. Maybe your religion or ethnic group is being oppressed, or maybe you just misinterpreted a key passage of The Bible. For whatever reason, you've decide to raise stakes and head out into the great unknown to found a new colony where you can live and prosper and marry your cousins, or not, as you see fit.

You've got plenty of supplies and a band of hardy and like-minded colonists at your back, and you're ready to go! Hold on, sparky. How are you going to get there? If your destination can be reached by land, you can just hoof it, but if there's an ocean or its Recycled IN SPACE! equivalent, the vast expanse between the stars, to cross, you're going to need a Colony Ship.

Unlike exploration or military vessels, a Colony Ship is intended for just one purpose: to carry everyone and everything needed to start a self-sufficient colony. That includes people, animals, food, tools, seeds, and in spacefaring settings, the machinery necessary to terraform an alien world (or not). Particularly large expeditions may require a fleet of these ships; others will be entirely self-contained in one vessel.

Colony Ships are sometimes made from converted freighters, passenger vessels, or obsolete military ships. They tend to be large, slow-moving, and lightly armed and armored (if at all). If there are hostiles about, they often require a military escort to ensure they reach their destination safely. The spacefaring variation is part of the Standard Sci-Fi Fleet and, in settings lacking Faster Than Light technology, will likely be either a Generation Ship or a Sleeper Starship. Their maiden voyage is often intended to be a one-way journey, with the ship being scuttled upon arrival and salvaged for parts and raw materials for the new colony. Occasionally, a Colony Ship can be weaponized as a makeshift meteor drop by crashing it onto anything.

Sister Trope to The Ark, which is made to flee or shelter from a cataclysm. More heavily-armed variants occasionally overlap with The Mothership and/or The Battlestar. See also: Wagon Train to the Stars.