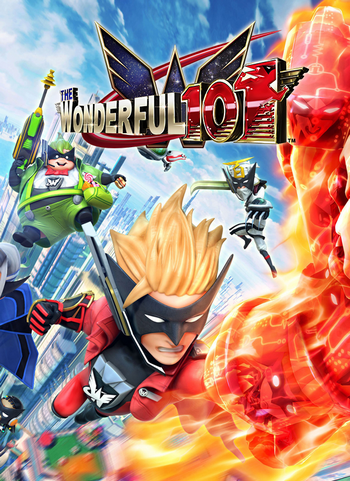 Team! Unite Up!
"The alien invasion of earth will be met by a group of fearless warriors that number just 100 souls. One hundred wonderful defenders of our world. Their faces are forever masked. Their tombs are forever unknown. They are..."
Advertisement:

The Wonderful 101 (formerly known as Project P-100) is a 2013 Stylish Action game published by Nintendo and developed by PlatinumGames exclusively for the Wii U. It stars a team of one hundred superheroes (plus you, the player) from the global defense force CENTINEL, named the Wonderful 1-Double-Oh, or the Wonderful 100 fighting an Alien Invasion.

When the alien armada known as the GEATHJERK attack Earth, the Wonderful 100 must travel across the globe, protecting a number of generators that power a shield surrounding Earth. However, one thing gets in their way — their own inability to cooperate. The leader of this group is Wonder-Red (aka Will Wedgewood) attempting to lead the ragtag group to victory. As the pressures of leadership begin to weigh down on him and his teammates barely listen, Red must demonstrate the resolve to protect Earth — even when the conflict between Earth and the GEATHJERK gets hotter and hotter, and hints of something more to the GEATHJERK's reasoning for attacking Earth begin to surface.

The player controls the whole team at once, using the Wii U GamePad to combine them into various weapons and utilities with Unite Morphs, transforming into different weapons such as fists, swords and more.

The Wonderful 101 does not take itself seriously at all. It's a roller coaster ride from the get-go, playing every trope seen in your average Saturday morning cartoon to the extreme. From beginning to end, this game makes no apologies for being wonderfully stupid and over the top. But what else would anyone expect from Platinum? Oh, and it's also really freaking hard.

was launched to allow PlatinumGames to self-publish an Updated Re-release of the game; the crowdfunding campaign was an overwhelming success, and The Wonderful 101: Remastered would release on Nintendo Switch, PS4, and Windows PC (Steam) in May 2020. A DLC was later released for the Remastered edition that allowed players to play as Prince Vorkken.

"I knew we forgot someone: You."
Feedback