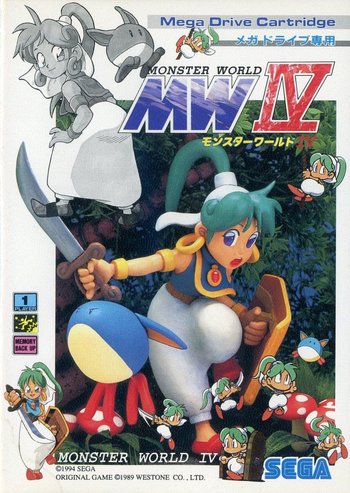 Japanese cover art with various Asha poses plastered all over the box.
See the artwork for Wonder Boy: Asha in Monster World. 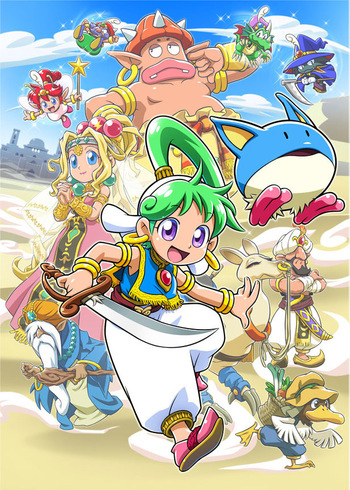 Monster World IV is the sixth installment in the Wonder Boy franchise, originally released for the Mega Drive before the franchise's 20 years long break. The player controls Asha, a young girl who embarks on a journey to help out spirits calling for her, and is accompanied by an amorphous Ridiculously Cute Critter known as a Pepelogoo and a disgruntled genie who escorts Asha to the Kingdom of Rapadagna. Notable for being the only "Monster World" game without a male protagonist and thus was originally released without the usual "Wonder Boy" branding.

Monster World IV remained exclusive to the Japanese market until Sega released an English-language version of the game for the Wii Virtual Console, Play Station Network and Xbox Live Arcade (the XBLA release is part of Sega Vintage Collection: Monster World along with the original versions (in Japanese and English) of Wonder Boy: Monster Land and Wonder Boy in Monster World) in May 2012, and included the game into the built-in library of the Sega Mega Drive/Genesis Mini in 2019.

A remake called Wonder Boy: Asha in Monster World was announced in August 2020 and released on May 28th, 2021 on PlayStation 4 and Nintendo Switch, with a PC version released through Steam coming on June 29th.